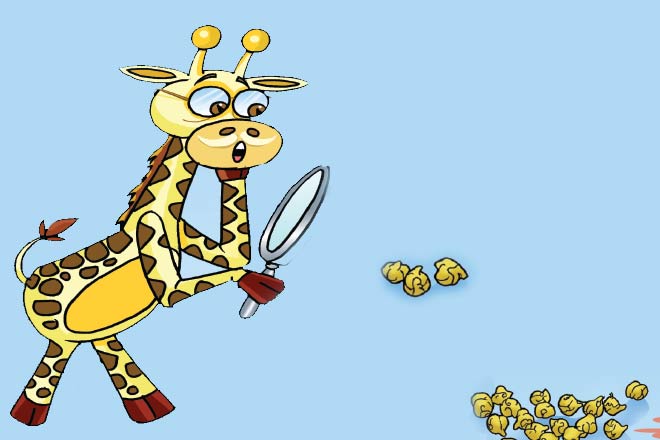 Bhikhu the Bear had come to Champakvan. He was a famous astrologer. The animals of Champakvan were highly impressed by his talks.

Mickey the Rabbit extended his palm and asked, “Please read my palm and tell me as to when will my days turn sunny? I think I am possessed by some evil spirits. Nothing goes right with me. Caty Aunty kidnaps my young ones when we are out for work. Please suggest a way out.”

Bhikhu said, “I will have to perform some rituals to ward off the evil spirits and that will cost some money.”

“We are ready to spend any amount for it,” said Mickey.

Foxy the Fox came to Bhikhu and asked, “Baba, I have heard that you can double money and gold. Is it true?”

Bhikhu raised his head with pride and said, “A powerful being like me can do anything.”

Foxy got excited and gave away all her valuables and money to Bhikhu.

Bhikhu became famous in Champakvan. The animals treated him like a king. They used to get lot of fruits for him. Bhikhu had involved Bhaggu the Horse in his plan. They both enjoyed all the attention from Champakvan.

Bhikhu kept telling the animals that he was performing the rituals daily. He told them that they should come to him two days prior to Diwali and take their valuables and money that will have doubled by then.

As instructed by Bhikhu, Mickey and Foxy went to Bhikhu’s house to collect their valuables. They were astonished to see that Bhikhu and Bhaggu were nowhere to be seen. They became panicky and started to weep.

Old Graffiti Giraffe Uncle had come to Champakyan. He saw Mickey crying and asked him for the reason. Mickey narrated the entire episode.

Graffiti asked, “Did Bhaggu limp while walking? Did he have chickpeas laden on his back? Does any of the two have wounds on his body?”

Some animals informed that a wounded Bhikhu was seen rushing out of his house with a huge bag in the morning. Everyone there was shocked as to how Graffiti Uncle knew so much about Bhaggu and Bhikhu. They pleaded him to take them to Bhikhu and Bhaggu.

Graffiti said, “I have no idea of their whereabouts.”

The animals took Graffiti to the police station. Inspector Shersingh started interrogating him about the case. He said, “You have given quite a lot of information about the two tricksters. Then why are you apprehensive to tell us about their hiding spot?”

Shersingh said, “You are indeed very intelligent. Now you all must follow those footprints and nab the frauds.” |

The animals of Champakvan, along with Graffiti, followed the footprints.

They reached a place and Graffiti said, “Wait.

They both must be around this place.”

“How can you be so sure?” asked Mickey.

Graffiti replied, “Look around. There is no grass here. It seems someone has just finished grazing. And also there is a river nearby for drinking water.”

Just then, Bhikhu came out of the river and Mickey nabbed him. Foxy saw Bhaggu nearby and jumped on his back. Bhaggu tried to escape but in vain. Bhaggu and Bhikhu were taken to the police station. The police seized all the money and valuables from them and returned the same to Mickey and Foxy.

Shersingh felicitated Graffiti Uncle and said, “You have accomplished a lot of things just by using your intelligence. You are an inspiration to all the citizens of Champakvan.”