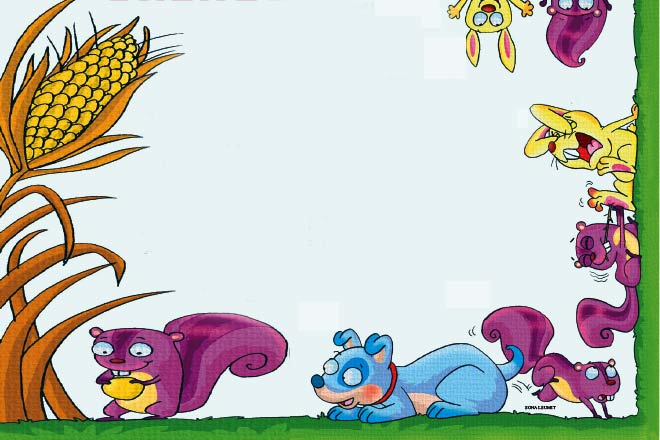 Chulbuli Squirrel considered herself very lucky. She had a big banyan tree for a house. She lived there by herself in great comfort.

There were lush green pastures and fields near the banyan tree. The crops would sway in the fields when the wind blew. And grains scattered and fell on the grass every single day.

This made things very easy for Chulbuli Squirrel. All she had to do was to climb down the tree whenever she was hungry and help herself to the grains.

There was a small pond near Chulbuli’s tree too. It never went dry. In fact, the pond was full of cool and clear water throughout the year. Chulbuli Squirrel had to simply skip to the pond and drink its water whenever she was thirsty.

The weather too was always pleasant. The skies above the tree were covered with soft, white clouds. And a cool and gentle breeze always blew around the tree.

A short distance from Chulbuli’s tree was a field with a barn. Babloo Rabbit and the barn owner’s dog who was called Tommy Watchdog lived there. They were Chulbuli’s friends and often played with her.

Tommy Watchdog worked very hard during the day. He was also very alert during the night. If he ever saw anyone coming near the field or barn, he would start barking loudly and alert the barn owner.

One day, Chulbuli Squirrel met Tommy Watchdog near the field. He hadn’t slept too well the previous night and looked very tired.

“I feel very sorry for you, Tommy,” Chulbuli Squirrel said. “You guard the field all day and night. You have to bark all the time. Your jaws must be aching with all the barking you do. Its hard work, isn’t it?”

Tommy Watchdog kept quiet. He listened as the little squirrel went on. “Look at me! I am so happy!” Chulbuli Squirrel went on cheerfully. “There’s no happiness greater than mine. There’s nothing that can make one happier than living in a comfortable house and having an easy life.”

The Boring Day of Pickly Wibble the Hedgehog

Chulbuli Squirrel didn’t understand what the dog meant. “Er… Tommy, my friend,” she said. “Let’s discuss this some other day. It’s lunchtime now. I must go to the field. There are golden grains of corn waiting for me.”

The grains of corn lying on the field was soft and sweet. Chulbuli Squirrel ate them all and then rested on the grass below her tree.

She looked up at the sky and saw that there were soft, clouds above her. The breeze too was cool and refreshing. Chulbuli Squirrel felt very happy.

“Ah! What beautiful weather! My life is perfect!” she thought. “There is nothing else that can make me happier!” She closed her eyes and fell asleep on the grass.

Suddenly, the sound of screaming pierced Chulbuli Squirrel’s ears. She opened her eyes at once and looked around. She quickly hopped towards the direction where the sound was coming from.

Chulbuli Squirrel hopped further and stopped. “Oh no!” she cried as she spotted her friend Babloo Rabbit.

He was wincing and groaning in pain. Chulbuli saw that a big thorn had pricked Babloo Rabbit’s paw. It was bleeding and Babloo Rabbit looked very distressed. There was nobody around to help pull the thorn out of his paw.

Chulbuli Squirrel quickly hopped towards Babloo Rabbit and tried to pull the thorn out with her teeth. But the thorn was thrust deeply and did not come out easily.

Chulbuli tried harder. But the thorn still didn’t come out. In fact, it pricked Chulbuli’s mouth. “Ouch!” Chulbuli Squirrel cried in pain. The thorn had stung and scratched her mouth badly but she decided to ignore it. She was more concerned about helping Babloo Rabbit. She couldn’t bear to see her friend in such great agony.

Chulbuli Squirrel tried to console Babloo Rabbit. “Don’t worry, my friend!” she said in a reassuring tone. “I know that I am small but I will try my best to help you.”

Chulbuli Squirrel then held the thorn tightly with her teeth. She loosened it at first by pulling it from all sides. She then pulled as hard as she could. To Babloo Rabbit’s great relief, the thorn now came out in one go. But Chulbuli Squirrel lost her balance in the bargain. She fell against a rock and injured her little back.

Babloo Rabbit felt relieved as soon as the thorn came out of his paw. He stopped groaning and smiled. Chulbuli’s mouth was still stinging. And her back was badly injured too. But the moment she saw Babloo Rabbit smiling, she forgot all about her pain and watched her friend.

Tommy Watchdog, who had heard the commotion, came along.

He saw his two friends and immediately understood what had happened.

“Chulbuli, you are hurt.” Tommy Watchdog told the little squirrel with concern. “Let me apply some medicine on your wounds.”

“Forget about my wounds, Tommy!” Chulbuli Squirrel smiled and said. “They really aren’t bothering me. I’m feeling very happy now. I helped remove a thorn from Babloo Rabbit’s paw. It was causing him great discomfort.”

“But is this happiness greater than the one you get from living on your comfortable tree?”

Chulbuli Squirrel thought for a moment and then said, “No, Tommy! This happiness is far greater. I am happier to have helped a friend in need than living the same old comfortable life. I now understand what you tried to tell me. The greatest happiness comes from helping a troubled friend.”

Indeed, the greatest happiness comes from helping a troubled friend.