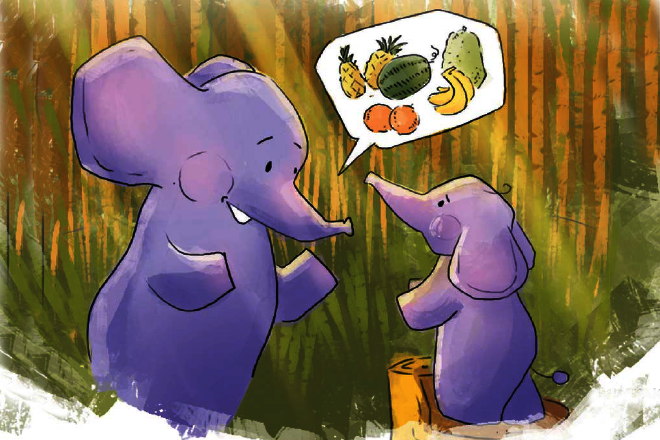 “Young Jojo, the elephant was excited as he had been invited for his friend’s birthday party.

“It is Ronny’s birthday on Sunday. He is organising a pool party. We’re going to have a blast!” he said to his mother.

“Did you say, Sunday?” asked his mother, flapping her large ears.

“Yes. He says that there will be delicious food and lots of games,” said Jojo, now facing his mother.

“Jojo, I am sorry, but we may not be able to go,” said his mother. “Sunday is the Forest Elephant Day. I want you to come along. You’ll get to meet all your distant relatives and cousins.”

“No, mommy. I don’t want to go for that,” said Jojo, extending his trunk to touch his mother’s. “I cannot miss Ronny’s party. Please!” he said, making a cute face.

“The celebrations will be fun, Jojo. All the animals will assemble at the main ground. There will be a speech by our lion king praising the efforts elephants take to protect the forest. There will be delicious food,” said Jojo’s mother, trying to convince him.

“They will have watermelons, musk melons, pineapples, bananas of all varieties and jack fruits. Isn’t that great?” mother tried to impress Jojo.

“Oh, mommy!” said Jojo, rolling his eyes. “That is the food we eat every day. Such dull and unattractive food!” he said with a slight snort.

His mother was silent for a second. She then asked, “What is the menu at Ronny’s pool party?” “He has ordered pizzas, burgers, wafers, noodles, and French-fries. There will be lots of cola drinks, too!” answered Jojo. “I’ll have a few bottles of cola once I reach Ronny’s house. Then I’ll have some after the cake-cutting. Then, I’ll have more while playing and finally, some more bottles of cola before leaving the party,” he rattled off in excitement.

“You know what you call this menu?” asked Jojo’s mother concerned. “It’s called JUNK! And junk food is not good for your health. By the way, what do they have for dessert?”

Jojo realised that his mother would not allow him to eat junk food.

His mother sensed that Jojo was sad. So, to lighten the mood, she asked him, “Didn’t you mention games? What games are you going to play at the party?”

Jojo immediately brightened up and replied, “We’ve planned a swimming competition. Then, there’ll be a throw ball competition and finally, a card game.”

“The games sound interesting,” said his mother, trying to cheer him up. “But avoid eating junk food. You can attend the pool party and then rush to the main ground to join me for the buffet.”

Jojo was happy that mother allowed him to attend the pool party.

Finally, Sunday arrived. Jojo and his mother got ready and left for their respective events.

Jojo and his friends had a great time at the pool party. Though mother advised him to avoid junk food, the temptation was too much for Jojo to resist.

“Mommy won’t find out. I’ll eat some fruits at the elephant festival. That way mommy will not doubt me,” he thought to himself. Following the competitions, Ronny was declared the fastest swimmer, while Jojo was judged the best player in throw ball. Jojo was given a big bottle of cola as a prize. He was elated.

After the party, Jojo rushed home to hide his prize and then went to the main ground to join his mother for the Elephant Day celebration.

By the time Jojo reached the main ground, the celebration was in full swing. King Leo was thanking all the elephants for their role in maintaining the forest’s ecosystem. After his speech, the animals proceeded to the buffet.

All kinds of fruits were piled up to form big mountain-like structures.

Jojo’s mother carried a big watermelon and dropped it on the ground before him. But Jojo could hardly eat. His tummy was already full.

“If I eat even one more bite, I will puke,” he thought to himself.

His mother quickly bid all her friends goodbye and walked home with Jojo. By this time, Jojo was already going through a terrible tummy ache. His stomach was rumbling quite loudly.

“I can hear your tummy, Jojo,” said his mother. “I’ll get you something to eat.”

“It is okay, mommy,” said Jojo, looking down. He could not face his mother as he had lied. He also realised how concerned his mother was regarding his well-being.

His mother was right. Jojo felt better after drinking the cool water from the stream.

Once they reached home, both of them went to bed. Jojo’s mother fell asleep almost immediately. But Jojo woke up and walked silently to the spot where he had hidden the cola bottle. Jojo carried the bottle out and dumped it in a garbage bin. The bottle was gone and so were Jojo’s guilt and weakness for junk food!