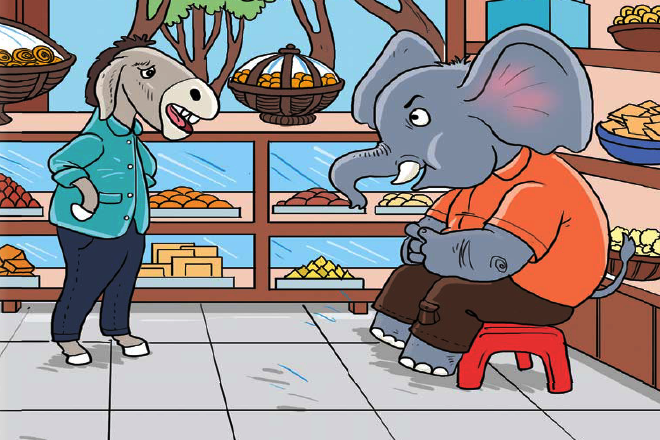 Bhola, the donkey worked at Kaalu, the elephant’s sweet shop.

“What is the matter, Bhola? Why do you look worried?” asked Kaalu.

“I am worried about my son Lattu,” replied Bhola.

“What happened to him? Is he unwell?” asked Kaalu concerned.

“He is fine. I am worried because he does not show any interest in studying. I am tired of trying to make him understand that going to school is important. But he does not listen to me,” said Bhola.

“We have to think of some other way to make him understand. Bring him to meet me tomorrow. And don’t worry, everything will turn out alright,” said Kaalu.

Next day, Bhola brought Lattu to the sweet shop to meet Kaalu.

“Hello, Lattu. Your father tells me that you are not interested in going to school. Why is that so?” asked Kaalu.

“I don’t like studying, Uncle Kaalu. I want to start working right away and earn some money like my father,” said Lattu.

“Alright, you can start working in my shop. What sweets and snacks can you make?” asked Kaalu.

“I don’t know how to make any sweet or snack,” replied Lattu.

“In that case, why don’t you sell some papads? You can carry some with you and sell them to the animals you meet along the way,” said Kaalu.

Kaalu gave him 20 papads in a basket and said, “Sell each papad for Rs.10. After you’ve sold them all, come back to the store to collect your payment for the work done. Just remember: Don’t give the papad to anyone without taking Rs.10 first.”

“Okay, Uncle Kaalu,” replied Lattu and went out to sell the papads.

Lattu met his school friend Munnu, the fox on the way.

“Hey, Lattu. What do you have in the basket?” asked Munnu.

“These are papads from Uncle Kaalu’s shop.

“Uncle Kaalu’s papads are famous. I do want to eat one. But I have only Rs.5. Will you give me half?” asked Munnu. “No. If someone does not buy the other half, it will go waste. Uncle Kaalu has asked me to sell all the papads,” said Lattu.

“Yes, I do. My father gave it to me before we left home this morning,” said Lattu.

“Why don’t we pool our money to buy one papad and eat a half each?” suggested Munnu.

“This does not seem like a bad idea,” thought Lattu and agreed.

Lattu collected Rs.5 from Munnu and put it in his pocket along with his money. Then, the two shared a papad. “That was yummy! I feel like eating some more,” said Munnu.

“But we don’t have any money,” said Lattu.

“Yes, you do. Didn’t we just pool in our money to buy one?” asked Munnu.

“Yes, but that’s the money I made from selling the papad we just ate,” said Lattu.

“Half of that money is mine. So, take our money again and buy another papad,” said Munnu.

“That seems logical.Uncle Kaalu did ask me to take money before selling a papad. So I am taking our money with which we bought one papad and buying another one,” said Lattu, considering the idea. “You are right, Munnu. Let’s buy another papad with the money I made from selling the first.” Lattu “took” the money from his right pocket and shifted it to his left, after which the two shared another papad. The two applied the same logic and ate up all the 20 papads. Finally, Munnu bid Lattu goodbye and continued on his way to school, while Lattu returned to the shop.

“Uncle Kaalu, I sold all the papads!” Lattu announced proudly.

“That’s great. Can you give me the money?” asked Kaalu.

“Where is the rest of the money?” asked Kaalu.

“This is all the money I made, Uncle Kaalu. Like you said, I did not take out a papad without taking Rs.10 first,” said Lattu.

“If you had 20 papads and you sold them each for Rs.10, then how much money should you have made?” asked Kaalu.

Lattu could not answer as he did not know how to calculate.

“You should have Rs.200,” Kaalu answered for him. “Tell me what exactly happened.”

After Lattu narrated what he and Munnu had done, Kaalu laughed. He said, “So, you thought you could use the same Rs.10 to buy papads from yourself? And since you did not know that selling 20 papads would get you Rs.200, Munnu tricked you easily.” “This is a lesson for you to realise why going to school is important. At school, you would have learnt to calculate and Munnu couldn’t have tricked you,” said Kaalu.

“Yes, you are right, Uncle Kaalu. I will start going to school from tomorrow,” said Lattu.

Bhola was surprised to see the change that had come over his son. “Thank yousir! Because of your idea, my son has finally realised the importance of going to school.”

“You should thank Munnu, as well. He, too, was in on the plan,” said Kaalu smiling.