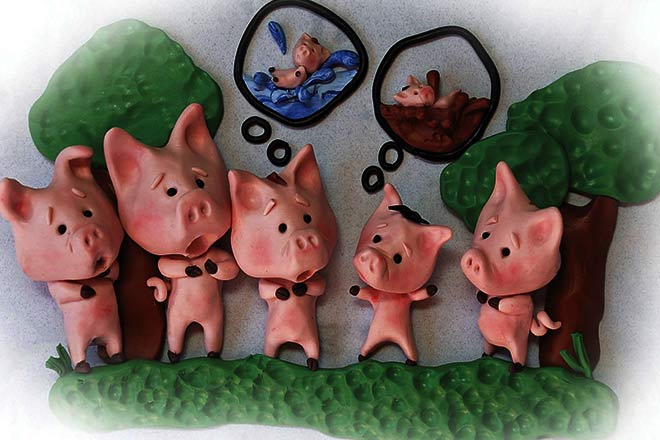 Gopu, the pig was very naughty. He had a few naughty friends with whom he often went roaming. Sometimes his friends left him in a remote place and ran away. He often lost his way and had a tough time finding his way back home. Gopu still liked to play with them.

“Gopu, let’s go to the river. It is too humid. We’ll go into the water and play. You enjoy swimming, don’t you?” asked Ganu, the pig.

“Yes. I love to play in the river. Let’s go.” Gopu readily agreed.

“I am going to roll in the muck,” declared Bansi.

Mantru interrupted, “We shouldn’t play in the muck. It spreads diseases. It’s important to be careful about hygiene. You can play in fresh water for sure.”

Bansi agreed. They decided to stay away from dirty puddles. They started walking towards the river.

They swam in the river for hours. However they were unaware of the approaching danger.

Four wicked foxes had seen them going towards the river.

Nakul, the fox said, “These tiny piglets are too tempting to resist. Let’s follow them and relish their tasty meat.”

Pandu, Sam and Baddy nodded their head and decided to attack the piglets.

They quietly proceeded towards the river and hid behind the bushes. They were patiently waiting for the right opportunity.

The piglets stepped out of the river and the foxes chased them. All the piglets, except Gopu, managed to escape from the foxes. Gopu was the youngest and couldn’t run fast. As a result, the foxes surrounded tiny Gopu. Deenu, the donkey was grazing near the river. Some weird noises drew his attention. He looked around and saw that Gopu was in danger.

Deenu immediately went near Gopu and started braying, “Leave the kid alone or all of you shall pay for it.”

Deenu ran towards Nakul and kicked him hard. Nakul was injured but managed to flee.

The other three foxes also ran for their life.

“Thank you, Uncle. Had you not been present, I would have lost my life.” said Gopu.

Deenu said, “How did you come here?”

Gopu narrated how his friends forced him to come near the river.

Deenu said, “You should always obey your parents. Also, it’s not nice to be friends with such animals who leave you in danger. Learn from this incident and never repeat such a mistake. Come, I shall drop you home.”

“Uncle, please don’t tell my parents about the incident. They’ll be disappointed and worried,” pleaded Gopu.

Deenu said, “I will not tell your parents only on one condition. You shall promise to always obey your parents and avoid bad company.” Deenu dropped Gopu near his house. Gopu decided to obey his parents. He gave up talking with his selfish friends and made a few new friends. Gopu had learnt a lesson. He took great care never to put his life in danger again. 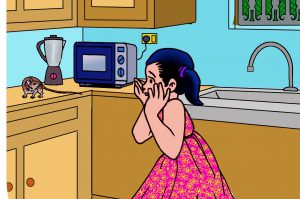 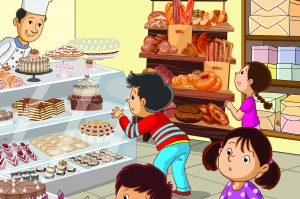