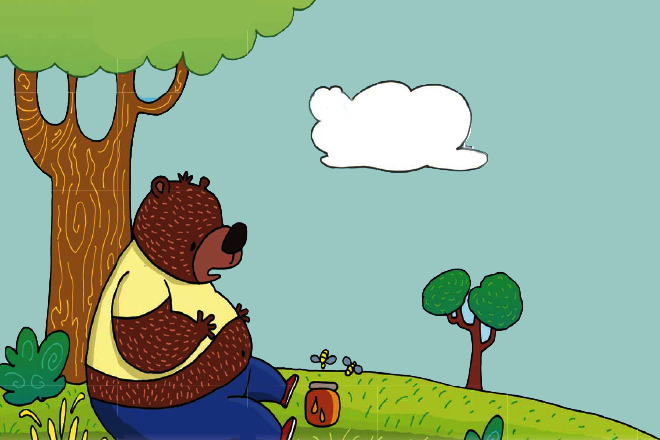 Fatty bear was very sad because he was fat. He loved eating food because of which his weight kept increasing, even though he tried to control his eating habits.

The gym trainer Sam told him to join the gym, but Fatty did not want to.

Fatty said, “They will make me do difficult exercises in the gym, and there is a restriction on the food. The gym is also expensive for me.”

Fatty thought for a while and came up with an idea. “There is a mountain in front of my house. There is fresh grass on it on which I love to roll. I will climb the mountain to roll on the grass and this will help me lose weight.” But there was a problem. The mountain’s slope was steep that made it difficult to climb it.

Fatty called his friend Gaplu deer who said, “Try and climb the mountain from the other side. It is flatter and easier to climb from there and then you can roll on the grass as much as you like.”

Fatty waited for a sunny day and then walked to the back of the mountain. Before climbing it, he looked at his body and said, “Hello my body weight. The time has come to say bye-bye to you.”

Soon, he was climbing the mountain, and though it was less steep here, he was breathless. But he climbed to the top of the mountain and from the top he could see the fresh green grass and his beautiful house.

His body was shaking with excitement.

He lay down and started to roll on the grass. In his excitement he forgot the slope was steeper on this side of the mountain. As he rolled down, his body picked up speed and soon he was rolling down the mountain like cannon ball. He tried to stop himself with his legs and hands but could not.

Finally, he reached the bottom of the mountain near his home. Luckily, the grass all along had been soft and fresh, so Fatty was not injured badly but his whole body was sore and he was crying.

Hearing his groans, his parents came out and on seeing him covered in grass and mud, they were shocked.

Fatty’s parents asked, “What happened to you Fatty?”

Heaving and weeping Fatty said, “I came rolling down from the top of the mountain. Oh mom! My back is completely sore and is hurting badly.”

Fatty’s father asked him, “How did you climb the mountain? It is such a steep climb.”

Poor Fatty could not give any answer. Sam was coming that way and overheard Fatty’s father. “I will tell you about this. Fatty had climbed the mountain to lose his weight, but unfortunately, because of the steep slope he got hurt. He was scared to go to the gym and wanted to save on money. But what he has done is more remarkable.”

Poor fatty was in pain and was sweating

His mother patted and his father soothed him.

Fatty said, “I am saying bye bye to this mountain exercise. I will come and join your gym or run in the park and eat healthy to lose weight.”

Soon Fatty became better and joined the gym. The other animals who exercised with him teased him and said, “You are most welcome to the gym but do tell us about your mountain experience. Did you enjoy rolling down the mountains?”

Everyone including him, laughed at his mountain exercise.