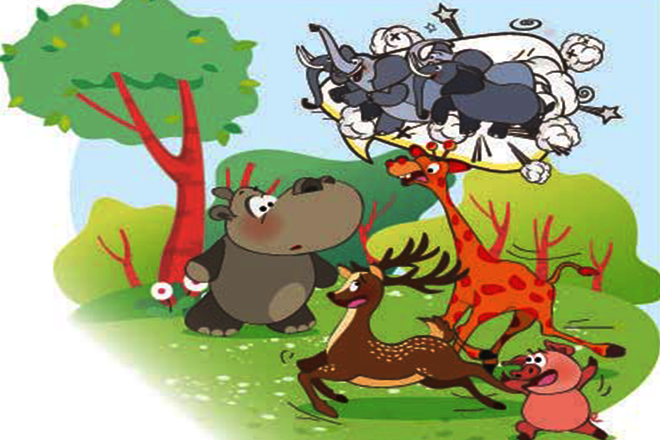 Run! Run!” screamed Dima, the deer, running past a group of animals.

“Why? What happened?” asked Hiro, the hippo, who was new to the forest.

“The elephants must be on the rampage again!” said Ginku, the giraffe, starting to run. “You better run too. You don’t want to be standing in the path of a big herd of elephants that is out to create mischief.”

Within seconds, the entire forest wore a deserted look—all the animals had either hidden themselves or run away.

The moles and rabbits went into their burrows, the monkeys and squirrels moved to the top-most braches of the trees and the other animals ran to the far edges of the forest.

King Sheru, the lion was among the first to run away!

In the jungle of Sonavan, every afternoon, the elephants ran to the river, unmindful of the havoc they created along the way.

At the river, too, they did not allow any other animal near while they bathed or played. If any animal dared to question them, they would toss them away with their trunk or splash water on them.

Though the animals were getting increasingly frustrated with the elephants’ behaviour, they kept away from them for fear of getting hurt.

One day, all the monkeys gathered to discuss the problem.

“These elephants need to be taught a lesson. They have ruined the forest,” said one of the monkeys. “Yes. We are scared to even send our kids out to play,” said a mother monkey.

“We have tried talking to them and explaining to them politely, but they do not seem to listen. Even King Sheru is powerless against them,” said another.

Then, Manu, the leader of the monkeys, spoke up. “Talking won’t work anymore. We need to use our strength against these bullies. I have a plan,” he said.

All the monkeys listened intently.

“Tomorrow, before the elephants start for the river, let’s dig pits along the path and cover them with leaves. When the elephants run through the forest blindly, they will fall into the pits and be trapped,” said Manu.

“But how will small animals like ourselves dig pits large enough to trap a herd of elephants?” asked one of the monkeys.

“Our strength lies in our number. When all of us get together to do the job, it will become easier,” explained Manu.

Next day, the monkeys began digging the pits early in the morning. When the other animals found out what they were up to, they too joined in and helped dig the pits.

That afternoon, when the herd of elephants charged through the forest, the animals went to their usual hiding spots. They saw the elephants fall into the pits one after the other. After struggling for a while to get out, the elephants finally gave up.

Manu came down from the tree and said to them, “We will help you get out, but only if you promise not to trouble us anymore. You must not come back to this part of the forest again.”

“Please help us! We promise to stay on the other side of the river and not trouble you anymore,” the elephants assured him.

All the animals got together to pull the elephants out using a strong rope. As soon as the elephants got out, they ran to the other side of the river. Everyone celebrated the victory. The monkeys were hailed for their idea. King Sheru, too, congratulated them.

“You have saved the forest from the rowdy elephants. We are proud of you,” said Sheru.

“It wasn’t just us; all of us united to beat the bullies. So, we all deserve to be congratulated,” said Manu.