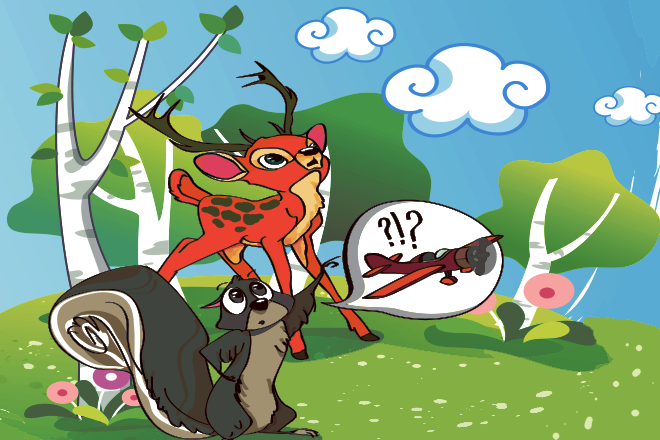 What was that?” asked Squiggy, the squirrel startled.

“What? Where?” asked Danny, the deer, looking around.

“There!” said Squiggy, pointing to the sky. “It flew over the tree to the other side.”

“I didn’t see anything,” said Danny, still confused. “What did you see?”

“I don’t know. It looked like a plane but there was no sound,” said Squiggy.

Danny came to the conclusion that it must have been an alien spaceship. He immediately told his friends about it and the news spread like wildfire across the forest. Even the news channels started reporting it.

“Did you really see an alien spaceship?” asked King Tammy, the tiger.

“I did see something fly past but it was unlike anything I had seen before. So, I am not sure what exactly it was,” said Squiggy, thinking hard.

“Did it make a sound?” asked Minister Monty, the monkey.

“No, it did not,” replied Squiggy.

“Hmmm…then Danny must be right. They are aliens!” declared Monty. “If aliens have come to the forest, we must welcome them. I’ve heard that they are very powerful.”

“You are right, Monty. Even I’ve read that their technology is several years ahead of ours. Let’s organise a grand welcome party for them,” said Tammy.

The entire forest prepared for the welcome party. A large open spot was chosen where balloons and banners were put up. Then, all the animals waited patiently for the aliens to show up.

Three days had passed and there was still no sign of the aliens or their spaceships.

“I don’t think the aliens are going to come,” said Tammy disappointed.

“I think so too. Squiggy made a fool of us!” said Tammy angrily. “Bring him to me!”

Squiggy went up to Tammy and said, “I did not lie, Your Highness. I really saw something, but I did tell you that I am not sure what it was,” said Squiggy scared. “We trusted you and made so many arrangements, and now we look like fools! It was an utter waste of our time. You will be punished for it,” roared Tammy.

“I give you a day’s time to find out what it really was or get ready to face your punishment,” said Tammy, before walking away.

“This is my fault!” thought Danny, realising what he had done. “If I had not spread the news, my friend would not have got into trouble,” he regretted.

Danny too began looking for the spaceship. He came across a clearing where he finally found the aliens!

That evening , Tammy  was taking a walk, when  all of a sudden, he saw something fly swiftly over his head.

“The aliens are here!” he screamed in joy.

Hearing  the commotion, the other animals  of the forest quickly  gathered around.

“I just saw the alien spaceship! It flew over my head,”  said Tammy excitedly.

“Yes.  There’s no need  to punish him now,”  said Tammy, waiting  for the aliens to show up again.

Suddenly, a small helicopter  flew over  Tammy’s head and landed before him. Everyone was puzzled. “That’s not alien spaceship, Your Highness,” said Danny, making his way through the crowd. “While looking for the alien spaceship, I found a few kids playing with their remote-controlled toy airplanes and helicopters close to where  Squiggy and I were talking the other day. Squiggy must have seen one of these toys and got confused.”

The realisation downed Tammy. “So the aliens were actually living among us,” he said smiling. He then turned to Squiggy and said, “Please forgive me for accusing of you lying. I should have verified the rumour instead of trusting  it blindly.”

“You are right, Your Highness. This is a lesson for all of us,” said Monty.

All the animals agreed.