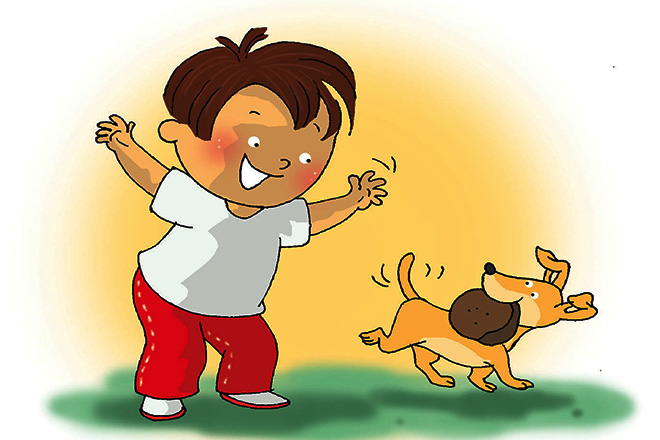 Stray dogs are often treated badly. Timmy was one such dog. He lived with his family and friends near the garbage bins. People from the nearby colony would dump their garbage there. The dogs would search for leftover food. In the afternoon, kids from a nearby school would throw stones at them. The kids would laugh, watching them run.

But Sonu was not like the rest. Timmy was surprised when eight-year-old Sonu offered him some chapattis. Timmy wagged his tails as a gesture of thanks. Sonu was immensely happy and waved bye to Timmy.

One morning, as Sonu waited for the bus, a van pulled up next to Sonu. A man stepped out and asked him for directions. As Sonu turned to give him the correct directions, the man grabbed Sonu and pulled him towards the van.

Seeing Sonu kick and struggle, Timmy quickly pounced at the man and bit his leg. The man shouted in pain and let go of Sonu, who ran back home. Timmy ran with him. Sonu ran to his mother and hugged her tight. “A man tried to kidnap me,” he said between sobs. “But Timmy bit him and rescued me.”

Sonu’s mother pacified him and walked up to Timmy who had been watching from outside the gate. She patted him on his head.

Sonu’s family took Timmy in as a pet and he began living with them.

Days passed and the bond between Timmy and Sonu grew stronger. Timmy started following Sonu everywhere once he’d come back to school. Timmy would go with Sonu to the park every evening and play with him.

One evening, Sonu saw that Timmy was behaving strangely kept barking at a backpack in the trash. The backpack was almost brand new and seeing Timmy barking at it, Sonu recalled all the instructions his mother had given him after the incident with the stranger.

She had told him that if he ever saw an unattended bag or a parcel, he should immediately alert the police or a grown up as it could be a bomb.

Sonu and Timmy quickly ran to the nearby police station and informed the inspector thereof the mysterious bag. The inspector immediately alerted the bomb squad and ensured that nobody tampered with the bag until they arrived. The bomb squad arrived in record time and discovered that it really was a bomb and quickly defused it. The day was saved.

The next day, all the newspapers published the story of how a boy and his dog saved the city from a terrorist attack and on 26th January, the following year, Sonu and Timmy were awarded the President’s Bravery award and waved at the crowd as they were paraded down Rajpath.