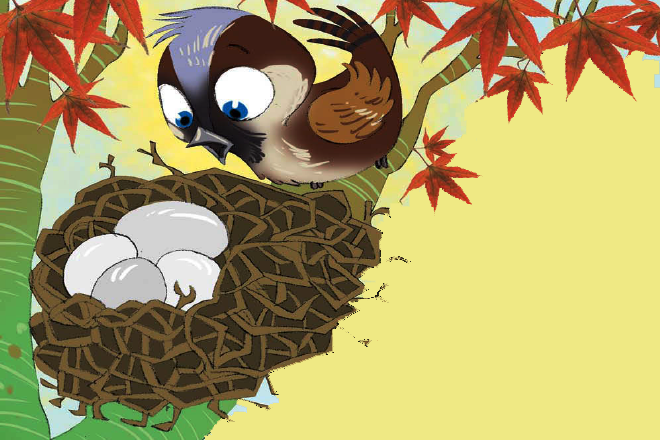 On the top of a tree lived Seenu, the sparrow. She had just built a nest and laid five eggs.

Seenu was very proud of her eggs and sat on them everyday and kept them warm. She would get up for some time every day to find something to eat. But, one day, Seenu returned to get the shock of her life.

In her nest were only four eggs today. Seenu searched high and low, but found no trace of her egg. She was devastated that her precious egg was missing and managed to console herself as it was nature’s way.

The next day when she returned to her nest, another egg was missing. Seenu was sure somebody was stealing her eggs and began to look for clues. As she searched the area around her tree, she found a handkerchief by the roots.

“This looks like Bunty’s handkerchief,” said Seenu to herself. Bunty, the monkey was Seenu’s arch enemy. He lived in the tree next to Seenu’s and he would always try to pick a fight with her. Certain that Bunty was the one who made off with her eggs, Seenu went straight to the king.

She narrated everything that had happened and the king listened intently. “Do you have any proof?” he asked her. Seenu gave Bunty’s handkerchief to the king.

The king ordered that Bunty be brought to him immediately. When Bunty was presented before him, the king asked him what he had done with Seenu’s eggs. But Bunty had no idea what the king was talking about. “Seenu told me that you have stolen her eggs. I order you to give it back,” said the king.

“Your majesty, I’m a vegetarian. There’s nothing I can do with Seenu’s eggs. Believe me, I’m innocent,” said Seenu.

“The evidence is against you. I will give you two days’ time. If you do not return Seenu’s eggs and own up for your misdeeds, you will be severely punished,” said the king and sent Bunty away.

Bunty was feeling low. He needed to somehow prove that he was innocent. He turned to his friend, Meeku, the rabbit. Bunty and Meeku were childhood friends and spent a lot of time together. Meeku believed Bunty and approached the king.

“Your highness, we request you to please give us a day’s time and we will prove that Bunty is indeed innocent, said Meeku, pleading the king. The king agreed and the plan was set.

The next morning, Seenu flew away from her nest in search of food. A few minutes later, Snaky, the snake came crashing to the ground. He had been living in the same tree as Seenu’s and had been living in a little hollow on the tree’s trunk.

He had an egg stuck in his mouth and begged Bunty, Seenu and Meeku, who had been hiding in the bushes all this while, to save his life. “Help me. I can’t breathe,” said Snaky, his face turning blue. The three took Snaky to the nearest hospital. The egg was wedged firmly inside Snaky’s mouth and the doctor couldn’t pull it out. Snaky needed an operation. Snaky was given anesthesia and he fell asleep. A short operation later, the doctor removed the egg.

Snaky could breathe again and told them how he noticed that Seenu had laid eggs and how she would fly away everyday for some time. “Since she wasn’t at her nest, it was the perfect time to eat the eggs. But for some reason, the egg I tried to eat today refused to break after I swallowed it.”

“It’s no surprise that you couldn’t” said Bunty. “What you ate in fact was a stone. When we saw that Seenu’s eggs have been going missing, we knew that the perpetrator would return to the scene of the crime and try again. Unfortunately for you, we were smarter than you thought.” Snakey was arrested by the king’s guards. Seenu apologised to Bunty for wrongly accusing him of stealing her eggs. Bunty and Seenu managed to settle their differences and lived happily ever after.