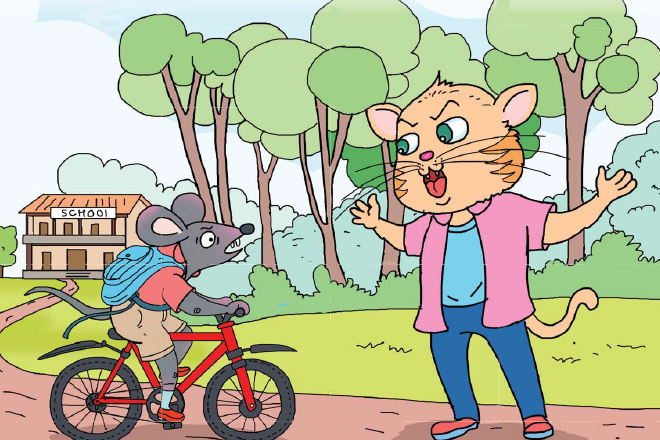 It was time for Munnu, the mouse to start for school. But he was worried. The previous day, he had seen Billu, the cat prowling along the path to school, looking for a prey.

Since most kids travelled together by school bus, Billu could not catch them. But Munnu usually rode his bicycle to school every day alone, so Billu was sure to catch him.

Just as he had anticipated, Munnu saw Billu standing by the side of the road, eyeing him greedily. Munnu pedalled as fast as he could and raced past him.

“That was close!” thought Munnu relieved.

However, on the way back from school, Billu was standing right in the middle of the road, blocking Munnu’s path.

“Munnu, my friend! How are you?” Billu greeted him with a sly smile.

“Oh no! I am done for! What will I do now?” Munnu wondered nervously.

Billu was stronger and faster than him, so there was no point in trying to run away.

“I have to stay calm and come up with an idea,” he thought. At that moment, he remembered his teacher once telling him that when someone is angry, they lose their ability to think clearly. So, Munnu had an idea. He slowly got off his bicycle. “Getting ready to run away?” asked Billu, narrowing his gaze.

“Of course not! I am not scared of you. In fact, none of my friends find you scary,” Munnu taunted Billu.

Billu was taken aback. He did not expect Munnu to talk back confidently.

“Don’t my claws and teeth scare you?” Billu asked, flashing his razor-sharp teeth.

“They actually look funny!” laughed Munnu. “Moreover, I’ve seen the way you run. I can push my cycle along and walk home and still you won’t be able to catch me,” he taunted Billu, poking his tongue out at him.

“How dare you! I’ll teach you a lesson!” hissed Billu and ran towards Munnu.

This was the opportunity Munnu was waiting for. He pushed his cycle down and ran. Billu tripped on the cycle and fell down. “Come on, Billu. Don’t sleep. I am waiting for you to catch me,” said Munnu, from a short distance ahead.

This made Billu angrier.

“Wait till I get my hands on you!” growled Billu. He got up and ran after Munnu.

Munnu continued to run. “What shall I do next?” he wondered while running as fast as he could.

Suddenly, Munnu spotted a deep pit, a few metres ahead of him. He had an idea. Instead of running around the pit, Munnu waited for Billu to catch up.

When Billu was just an arm’s length away Munnu swiftly stepped aside, revealing the pit before him. It was too late for Billu to stop. He fell into the pit.

Billu struggled to get out. “Please help me get out of here, Munnu. I promise not to trouble you anymore,” he cried.

Munnu wanted to walk away, but then, he remembered his mother’s words: “One must always help those in distress, irrespective of who they are.” So, Munnu picked up a rope that was lying nearby, tied one end to a tree trunk and threw the other to Billu.

“Hold the rope and climb back up. I’m going home. Bye!” he waved Billu goodbye and ran home.

He was happy to have escaped unharmed.