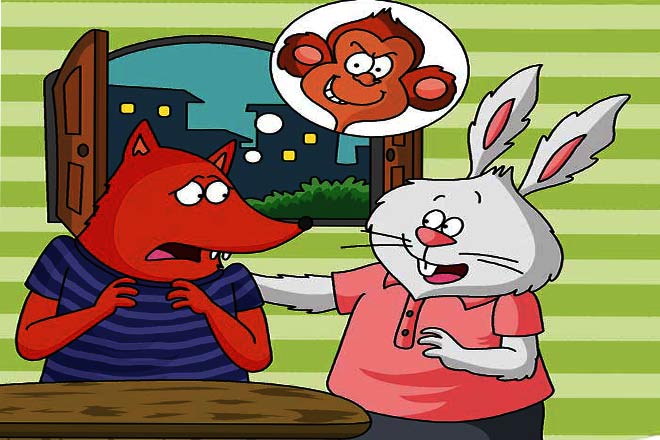 One morning, Baddy fox and Laptu jackal approached Cheeku rabbit for help. Cheeku was known to be fair and impartial. So, they were confident that Cheeku would help solve their problem.

“Yesterday, Laptu made some extra money at our store because of the festive sale. He couldn’t deposit it in the bank as it was quite late in the evening by the time he closed the shop. So, he came to my house and gave me the money for safe-keeping. But this morning, the money was missing,” said Baddy worried.

“Don’t worry, Baddy. We will find your money. Now, think calmly and tell me what you did with the money once Laptu gave it to you,” said Cheeku.

“Laptu had put the money in a yellow cover, which he handed over to me. After counting it, I hid it inside the rice bin to keep it safe,” said Baddy.

“Was anybody else there when you counted the money or placed it inside the bin? Do you suspect anybody?” asked Cheeku.

“Yes, I suspect Jumpy monkey. He was the only one who saw Laptu handing over the money to me. He even walked by my house a couple of times when I was counting the money,” said Baddy.

“In that case, let’s go to Jumpy’s house and find out. Come with me,” said Cheeku.

The three of them reached Jumpy’s house and there, they saw Jumpy and Meeku mouse counting some money.

Jumpy was surprised to see the three of them. “Hello! What brings you all here so early in the day?”

Cheeku explained about Baddy’s missing money. “Baddy says that you are the only one, beside him and Laptu, who knows about the money. So he suspects that you could have taken it,” said Cheeku.

“That is absurd! I did not steal the money!” said a shocked Jumpy.

“In that case, where did you get this money from?” asked Laptu, pointing to the bundle of cash in Jumpy’s hands.

“Meeku and I earned this money by selling the bananas from our farm,” said Jumpy.

“Liar! There’s no way you could have made so much money by selling bananas!” accused Baddy angrily.

“Calm down, Baddy. I will find out who the liar is,” said Cheeku. “Now tell me, how many notes were there and of what denomination? Since you counted the notes before you put in inside, you may know.”

Baddy became uncomfortable with the question. “Errr… There were 50 50-rupee notes,” said Baddy.

Cheeku took the bundle of cash from Jumpy and said, “Looks like Jumpy has all 100-rupee notes. So I guess, this is not your money.”

“Aha! Who is the liar now? There are a couple of 50-rupee notes as well,” said Jumpy.

“You have been caught, Baddy! Now out with the truth! Why were you trying to frame Jumpy? Did you really lose your money?” asked Cheeku.

“Tell the truth, or else we will complain to King Shersingh about you,” said Jumpy.

“Please don’t tell Shersingh! I am sorry I lied. We didn’t lose our money. Yesterday, while on the way to the shop, Laptu overheard Meeku and Jumpy talking about the money they made. So, we came up with a plan to get the money from them by wrongly framing them,” said Baddy. “Jumpy and Meeku made this money through hard work and not by cheating people. You should apologise to them,” said Cheeku.

Baddy and Laptu were ashamed of their behaviour. They apologised to Jumpy and Meeku for trying to cheat them.