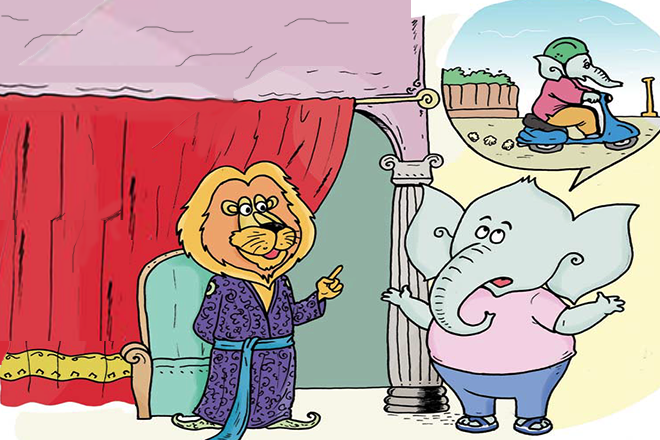 Shersingh lion, the King of Champakvan, was watching the news on television. There were several incidents of road accidents being reported. He became upset and thought to do something about it.

Shersingh invited Jumbo elephant to discuss the issue with him. Jumbo was well versed in the matters of road safety as he was the head of Champakvan’s Road Safety Patrol.

“Champakvan is witnessing an increase in the number of road accidents. This disturbs me greatly. I want your advice on what we can do to make Champakvan safer for all,” Shersingh said to Jumbo.

“Don’t worry, sir. I will definitely help you make Champakvan safer. First, let me study the situation and prepare a report. Based on that, I will be able to suggest some measures,” said Jumbo.

“Take all the time you need, Jumbo. The report has to be detailed,” said Shersingh.

Jumbo set to work right away. He went around all the roads in Champakvan observing the traffic movements and making notes. He compiled all of them in his report.

After a couple of weeks, Jumbo presented his report to Shersingh.

“One of the main issues I observed is that the residents of Champakvan do not follow traffic rules. They do not stay within the speed limit, they disregard traffic signals, do not follow lane discipline and park their vehicles wherever they find space, thus blocking traffic. Several signals at the main junctions are not working, causing a lot of chaos. They need to be fixed immediately. We also need to appoint traffic policemen at these junctions to facilitate the smooth flow of traffic,” said Jumbo.

That ambulance that came to halt

“Good work, Jumbo. I will ask my ministers to fix the signals right away. But what can we do to get the citizens to follow traffic rules?” asked Shersingh.

“I feel there is a lack of awareness about traffic rules and road safety among the citizens. Through campaigns, we can make our citizens aware of the benefit of following the rules. Wearing helmet for two-wheeler riders and seat belt for those driving cars should be made compulsory. If they do not follow the rules, fines should be levied,” suggested Jumbo. “That is an excellent idea, Jumbo. Let us also put up signs indicating speed limits near schools and hospitals, and prohibiting parking in congested areas,” said Shersingh.

“That will surely help, sir,” said Jumbo. “Another thing I observed is that though kids under the age of 18 are prohibited by law from riding motorcycles or cars, there are many of them who do so.

This is causing a lot of accidents. We can tackle this problem by penalising their parents for allowing them to drive in the first place,” said Jumbo.

“Yes, underage driving is a major cause of concern,” agreed Shersingh.

“There’s one more thing, sir. You could also consider allocating a separate lane for cyclists and pedestrians so that they can travel safely,” added Jumbo.

“Consider it done! Thank you for your suggestions, Jumbo. These steps are sure to make Champakvan safer for motorists and pedestrians alike. In celebration of this change, I declare the last week of February as Road Safety Week. Every year, during this week, we shall organise competitions, workshops on road safety and a survey on traffic trends and accidents,” said Shersingh. Next morning, the front page news on Champakvan Times was about the changes introduced by Shersingh with Jumbo’s suggestions. It read that besides setting up a dedicated accident helpline, Shersingh had created a new department to look into the traffic activities at Champakvan, under the leadership of Jumbo. He was commended for a job well done.