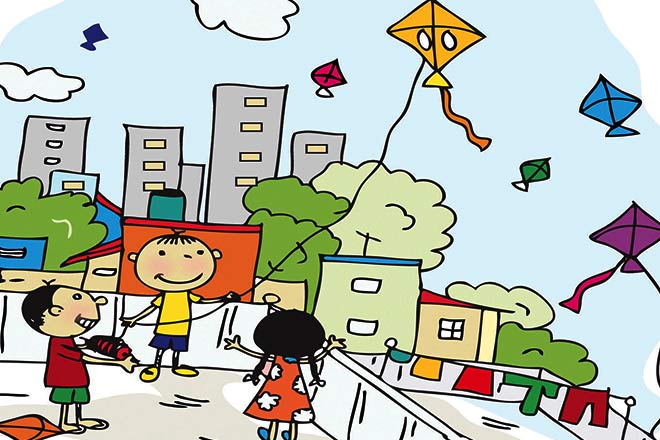 Deep lived with his parents and grandfather in Delhi. Every evening he played with his beloved pet dog Toto in the park.

After a while, many people stopped playing sports and flew kites. Deep also stopped going to the park with Toto. Instead he started flying his kite on the roof with his friends. Deep loved to fly a golden kite. Many people recognized Deep’s kite because of its unique colour.

Days passed. Toto was bored. He felt neglected. One day, when Deep’s mother went shopping in the morning, she forgot to lock the main gate. Toto saw this as an opportunity to run to the park. He slipped through the door and ran out. Toto used to accompany Deep to the park. Hence didn’t know the way to the park himself. Luckily he saw Deep’s friend Shyam going towards the park and followed him.

After reaching the garden, Toto ran through the bushes. He was so excited that he ran happily throughout the park.

He was glad that he could return to the park.

Soon it grew dark. Dark clouds covered the sky. Everyone in the park rushed home.

Toto realised that he should get back home through the front gate. But Toto was lost. He looked left and he looked right, but he didn’t know which way to go. Everyone in the park had already left, so Toto couldn’t ask for help. He began to panic and felt a little afraid. He walked around aimlessly. It started to rain and Toto was walking alone on the streets. Meanwhile, Deep had come down, as he had thought of playing with Toto. He searched for him everywhere in the house, but he could not Toto.

The whole family wondered where Toto was. As soon as the rain stopped Deep and the other family members went out on the streets, calling Toto’s name.

More From Champak: Damru And The Pet Snake

They went to the park, the market, the badminton grounds, but were unable to find Toto. Deep returned home disappointed and sad.

The family members returned too, failing to find Toto. They were heartbroken and tensed and began to think on ways to find Toto.

Suddenly Deep’s grandfather exclaimed, “I have an idea!” He told the others the plan. Everyone agreed and hoped it would work. Deep and his mother got a big golden kite and attached golden sparkling papers to the thread.

Deep took the kite and ran to his roof. The whole family followed him.

Deep flew the kite higher and made it go further. Toto in the meantime was crying as he couldn’t find his way back. He was hiding under a bench when he suddenly noticed something.

Looking carefully, Toto noticed a big golden kite flying in the sky. He was thrilled! Toto knew that only Deep flew golden kites.

Toto followed the thread in the sky and after crossing a few streets, he reached to a familiar neighbourhood. Toto was happy and found his way home. He barked happily when he landed on the doorstep. Everyone was happy when they heard Toto’s bark again.

Deep hugged him. Toto jumped around him. Deep never left his favourite pet alone again and took him to the park to play always.