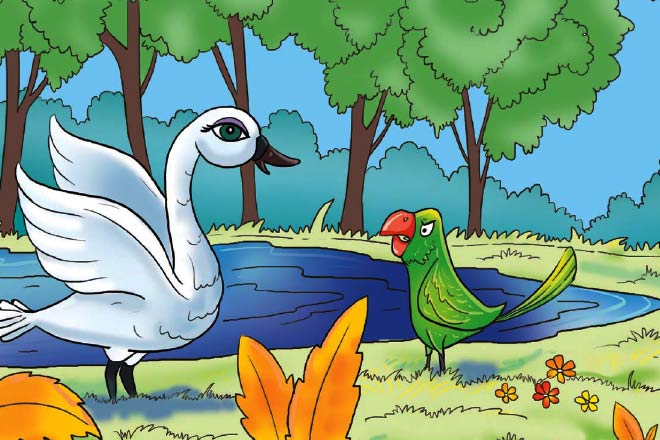 Piku was a handsome parrot. But he took too much pride in his beauty. Whenever he met the other animals in the forest, he would only talk about himself.

One day when he was looking at his feathers and admiring himself, he heard a beautiful voice coming from near the lake. Piku wondered to whom the voice belonged. Unable to contain his curiosity, he flew towards the lake to find out.

There, he saw a beautiful swan with feathers as white as milk and a beak that glistened in the sun. She was singing and dancing in the lake. She noticed Piku looking at her.

“Hello, there!” said the swan sweetly. “My name is Sofi and I’ve just arrived in your forest.”

“Hi, Sofi. I am Piku. Welcome to our forest,” said Piku warmly.

Just when he was about to talk about his beauty, Sofi said, “Look at my feathers, Piku. Don’t you think they are shiny and soft? And my neck—it’s slender and curvy. You may not have seen any creature as beautiful as I am!”

Piku was irritated. “How much she talks about herself!” he thought to himself.

He listened to her talk more about herself, and then finally said, “Sofi, I must go now. I’m pleased to have met you. Hope we meet again. Bye!”

On his way back home, Piku met Mittu, the squirrel. “There’s a new guest in our forest. But do stay away from her,” said Piku.

“Who is this new guest? And why are you asking me to stay away from her?” asked Mittu curiously.

“Her name is Sofi. She’s a swan. All she talks about are her feathers, neck, eyes and how beautiful she is! I don’t like her at all,” said Piku.

“Whether you accept it or not, that’s what you do. Ask anyone,” said Mittu, walking away.

Piku then met Bhola, the bear. “Stay away from Sofi, the swan!” Piku warned him. “But why? What has she done?” asked Bhola.

“She’ll bore you to sleep by constantly talking about how beautiful she is,” said Piku.

“Just like you! Now, do you realise how we feel when you keep boasting about yourself?” asked Bhola.

Suddenly, he heard Sofi’s voice again. It seemed like she was coming this way. Piku quickly left, not wanting another conversation with her.

Later, Piku sat down on a tree and pondered over what Mittu and Bholu told him. “Do I really talk about myself that much?” he wondered aloud. “They must be mistaken. It is Sofi who keeps talking about herself. I’ve never seen anyone so vain!”

Kalu, the elephant, who happened to walk by, heard Piku talking to himself. “Are you boasting about your good looks again?” Kalu asked Piku. “No, I was talking about Sofi, the swan. She irritates others by talking only about herself,” replied Piku.

“But that is what you do as well, and we get irritated with you. But we don’t tell you about it because you are a good friend and we didn’t want to hurt your feelings,” said Kalu.

Piku finally realised his mistake. “I am sorry. I didn’t realise how vain I was being until today. I am going to change that about myself, and hopefully make Sofi understand this as well,” he said. “And next time, do tell me if I do something wrong. Don’t keep it from me just because I am your friend.”

“Don’t worry, Piku. I am sure we won’t have anything to complain about hereafter,” said Kalu with a smile.