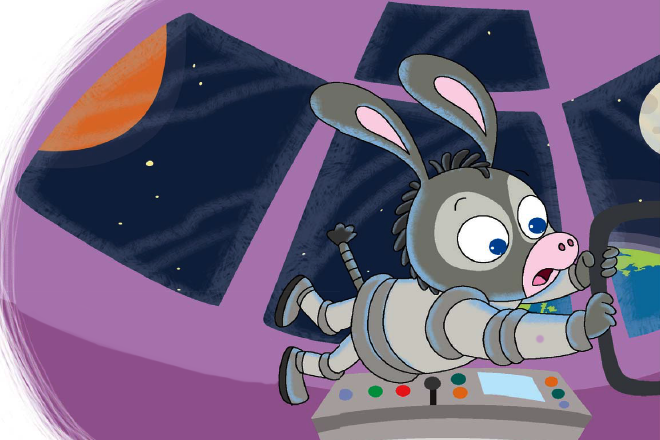 Golu donkey felt his weight was decreasing rapidly. “Oh! What is this? Where am I? And why do I feel so light?” he wondered.

Golu tried to open the door of the aeroplane. But the door did not budge.

Golu tried harder to open the door. He gathered his full strength and tried to push the door, but it still did not move an inch.

“Why is this door not opening?” Golu shouted in panic.

“This door will not open,” a voice boomed from the loud speaker.

Golu tried to see who was speaking, but there was no one around. He asked again, “Oh brother, who are you? And where am I?” He tightly held on to the door handle because now he was completely weightless and was floating in air. “Why am I not able to stand straight?” Golu shouted again, very frightened.

Golu’s eyes went to one of the monitors in front of him. He was surprised to see the image of his friend, Rex rabbit there.

“Thank goodness it is you Rex.” Golu felt relieved on seeing his friend. He asked, “Where am I?”

“You are in a space-ship. By mistake you boarded this space-ship, instead of the aeroplane you had to take. But don’t be afraid and do just as I tell you. If you want to ask anything, just go ahead,” Rex informed him.

Hearing that he was on a spaceship, Golu was more frightened. He asked, “Am I really in a spaceship?”

Golu then asked, “Why do I feel that I have no weight and why am I floating in the air?”

“Your weight has become zero because there is no gravitational force in space,” Rex explained.

Golu did not understand what Rex had just said. “How could anyone’s weight become zero?” Golu wondered.

On Earth he was a donkey weighing 40 kilograms. And here he had become a zero kilogram donkey. His brain could not figure this out.

“Yes, I have observed that,” Golu said nodding his head.

“But where you are now, the gravitational force is zero. And so, when you multiply 40 into zero, what will be the product?” asked Rex.

“It will be zero. That means because of the mathematical zero my weight has also become zero and I am floating in space,” said Golu trying to understand Rex

“Well said. Since there is no gravitational force here your weight has become zero,” Rex explained.

Then Golu noticed something shining near him and said, “Oh, this water bubble is also floating.” He extended his hand towards the floating bubble, but it slipped from his hand and started growing big like a balloon.

Seeing this, Golu asked, “If I want to wash my face, what should I do?”

“Take a piece of cloth and wrap it around the water bubble. The bubble will get into the cloth, with which you can then wash your face,” Rex explained.

But you do not need to wash your face here. There is no dust or dirt here that sticks to your body and makes it dirty,” said Rex.

“Oh Yes! I had not thought about it. But why am I not able to open the door of this spaceship?” asked Golu. On hearing this Rex started laughing. “You have asked a very good question. Take a look at the monitor that is showing what is outside. What do you see there?” asked Rex.

“Nothing. It is completely dark out there,” answered Golu.

“Then what will you do if you go outside? And since the space ship is flying the door will not open just now,” said Rex.

Suddenly something pricked Golu’s foot. He cried in pain, “Oh! What was that?” He got up with a jerk and sat up on his bed. “Where am I? I was in space,” Golu moaned.

His mother asked, “Were you dreaming again Golu? It seems you were travelling to space in your dream.”

“Oh yes Mom! I had a wonderful dream that I was in space,” Golu said excitedly.

“Will I ever be able to go to the space, Mom?” asked Golu after thinking for a bit. “Yes, son. If you study well, then you can become an astronaut and you can go to space,” his mom answered.

Golu got up and started getting ready to go to school. After all he had to go to space one day.