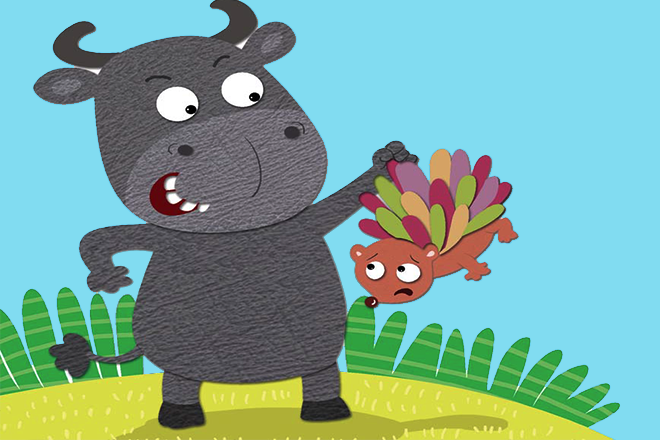 Ever since Barry, the buffalo had won the National Forest Boxing Championship, he was on cloud nine. Having proved that he was the strongest, he began to consider himself better than the rest of the animals. He especially did not think that smaller animals were even worth talking to.

“Move out my way or else I’ll throw you aside!” Barry threatened Rancho, the porcupine, one day.

“Watch how you speak, Barry. I am not scared of you,” retorted Rancho.

“Really? Let me teach you a lesson,” said Barry, lifting Rancho and tossing him afar.

Fortunately, Rancho landed on a soft bed of grass, and was uninjured.

“Whew! That was a close shave!” said Rancho, massaging his waist.

“Barry’s bullying is intolerable,” said Frodo, the frog. “Yesterday, he tried to trample me under his feet for talking to him. He said, being a small creature, I shouldn’t even dare to look at him.”

“That is outrageous! He thinks he is superior to all of us,” said Gina, the squirrel, enraged.

“We should do something about his behaviour,” said Misu, the mouse.

“I complained about him to our king Leo, the lion. He said that since he has just become the king, he doesn’t want to cause a rift between animals by taking a stand. Moreover, most of the larger animals respect Barry, so he doesn’t want to anger them and lose their support,” said Rancho.

“What about our support? Don’t we matter to King Leo? We have rights too,” said Polly. “We live in this forest and work as hard as any of them.”

“You are right, but who’s going to support us? Who will take a stand to protect us?” asked Anto, the ant.

Suddenly, there was a commotion. Barry had come out of nowhere and was charging towards them. All the animals who had gathered at the tea stall, ran helter-skelter. Rancho tried to stop them, but no one listened to him. Rancho was left to face Barry alone. “So, you are the leader of these animals! How dare you rally them against me?” fumed Barry.

“We were discussing how your behaviour has got out of hand. We, the smaller animals, have decided to not tolerate your bullying anymore,” said Rancho.

“Oh, really? What do you plan to do? Fight me?” Barry laughed.

“Yes! Let’s meet at the ground tomorrow in the presence of all the animals and fight. If I win, you should apologise to all of us and stop bullying us,” said Rancho.

“I accept. But if I win, you should accept you are inferior to me and do my bidding,” said Barry.

Rancho agreed much to the shock of his friends who had gathered around by then.

“See you tomorrow, loser. Get ready to serve me,” said Barry, walking away.

“What have you done, Rancho? How will you fight him?” asked Gina worried.

“If it takes a fight to win back our dignity and respect, then so be it. But I will need all your support,” said Rancho.

“You’ve taken such a big risk for our sake; we will definitely support you!” all the animals assured him.

Next day, everyone, including King Leo, gathered at the ground to witness the fight. They all felt sorry for Rancho.

“How will this tiny porcupine defeat the strong and mighty Barry?” they wondered.

“Are you ready to lose, you tiny creature?” Barry taunted Rancho.

“Wait and see who is really going to lose,” said Rancho. He swiftly landed a punch on Barry’s stomach and ran.

“Come back, you coward! Let me teach you a lesson,” Barry shouted and ran after him.

As soon as Barry started to run, his feet sank into the ground. He struggled to move. “What is the matter, you big bully? Can’t you run?” teased Rancho.

This enraged Barry even more. But the more he struggled to get out, the more he seemed to sink into the ground. He was helpless. The spectators laughed at Barry.

“Look at our boxing champ struggling to even walk!” said one of them.

“He let a small porcupine get the better of him,” laughed another.

Rancho walked up to him and said, “You are indeed stronger than all of us, but you should use your strength to help those who are weaker than you; not bully them.”

Barry felt bad for the way he had treated the smaller animals. “Forgive me, Rancho. My arrogance blinded me. I apologise to everyone.”

Rancho and his friends accepted Barry’s apology, and helped him get out. Later that day, King Leo invited Rancho to the palace to applaud him for his win over Barry. “How did Barry sink into the ground and you didn’t?” he asked Rancho.

“Last night, I got the help of my mole friends who dug several tunnels under the ground and made it loose. It was done in such a way that if any large or heavy animal walked or ran on it, the ground would cave in, trapping the animal,” said Rancho.