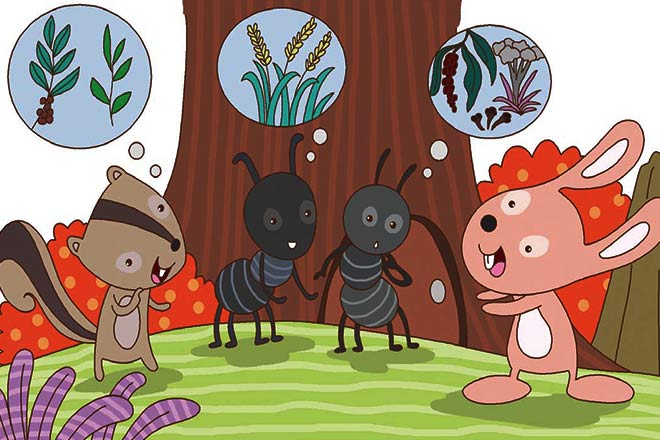 Skippy, the squirrel lived on a tree in the forest of Aria. Next to the tree was an anthill in which his friend Tiny, the ant and her family lived.

One day, Vicky, the rabbit moved into the forest and made a home for himself near the tree where Skippy and Tiny lived. Soon, the three became good friends.

During spring that year, Vicky said, “The soil here is fertile. Why don’t we cultivate something?”

“Yes, that’s a good idea. But what shall we sow?” asked Tiny.

“Since we like rice, why don’t we cultivate paddy crops?” suggested Skippy.

“Rice is mostly cultivated in the south of India because the soil there is smooth and retains a lot of moisture, which is necessary for paddy crops. If we were to sow rice here, then the crops will need a lot of water and additional care,” said Vicky.

“I like spicy food; let’s plant some spices,” said Tiny.

“A hilly terrain is best suited for tea, coffee and spices. They can be grown only by way of terrace farming and they require a chilly climate. It’s too hot here to grow these crops,” said Vicky.

A Taste of Their Own Medicine

“How do you know so much about the different types of crops?” asked Skippy in awe.

“I love horticulture. It is the art and science of growing plants. I have read many books on this subject. Currently, I am reading one on the different types of soil,” said Vicky.

“That sounds very interesting. I thought they were all the same. How many different types of soil are there?” asked Tiny curiously.

“Broadly, there are six different types of soils in India classified according to their characteristic, composition and region: alluvial, laterite, red, black, desert and mountain soil. Our forest has alluvial soil which is extremely fertile. It is so because rivers like Ganga and Yamuna flow down from the mountains bringing with them rich minerals and rocks. Wheat, sugarcane and pulses are best grown in this soil,” said Vicky

“In that case, how about we plant wheat crops?” asked Skippy.

Everyone agreed and began planning. Next day, Vicky brought along his friend Annie, the mole.

“Hello friends, meet Annie. She will also help us with the farming,” said Vicky.

Skippy and Tiny were not happy about Annie joining them. They did not mention it to Vicky, but later that evening, the two met alone to discuss the situation.

“What work will the mole do in the farm?” Skippy asked Tiny. “You and your family will sow the seeds. Vicky and I will water the crops. We will also use our sharp teeth to harvest them later and you will carry them back to our houses. But what will Annie do?”

“Even I don’t understand why Vicky had to bring her along. The more people there are, the lesser will be our share of the crops. But what can we do? Cultivating crops was Vicky’s idea and we can’t tell him not to bring his friend,” said Tiny.

As the two wondered what to do, Tiny suddenly had an idea. She shared her plan with Skippy, who agreed to it delightedly. The following day, all four of them set to work, ploughing the land, planting the seeds and watering it. As weeks passed, the seeds began to sprout. In a matter of months, the tiny saplings had become full-grown wheat crops. They had to take extra care of the crops for fear that it would get stolen or damaged by pests.

During the day, Vicky would take care of it and at night, it was the responsibility of Skippy and Tiny to keep an eye on the crops.

One morning, Tiny and Skippy frantically came running to Vicky and said that some of the wheat crops had disappeared.

More From Champak: Tit for tat

Vicky was shocked. “But how is that possible?”

“I suspect Annie. Two days back, I heard her talking to her friends and plotting to steal some of the crops. We must remove Annie from our group immediately,” said Skippy.

“I think it’s you two who should be removed!” said Vicky.

“Why should we be removed?” asked Tiny and Skippy surprised.

“That is because it was your responsibility to keep an eye on the crops at night. If the crops were stolen during the night, it means that you have not done your work properly,” replied Vicky.

“Even otherwise, while we three were doing all the hard work, Annie was just roaming among the crops and playing in the soil,” said Skippy angrily.

“So, that is the real reason!” realised Vicky. “I began to sense your growing dislike for Annie because you think she does not help with the farming. What you both don’t know is that she is the reason this crop has grown so well,” said Vicky.

On hearing this, Skippy and Tiny were taken aback. “How is that possible?” they asked.

“Moles are good at digging. Because of the holes she dug around the land, water and air could mix well with the soil. This ensured that the soil’s nutrition and minerals were replenished, thereby making our crops grow well,” explained Vicky.

Skippy and Tiny realised their mistake and were ashamed about their behaviour. They apologised to Annie and returned the crops they had stolen at night to put the blame on Annie. That day on, the four of them worked together with cooperation and respected each other’s hard work.