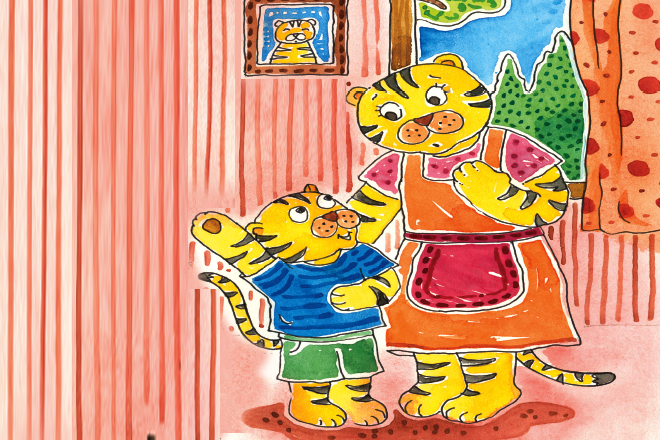 Tiblu was a tiger baby, and was very fond of exercise. In Champakvan, parents used to compare their babies with Tiblu and cite his example when they talked about fitness and good health.

Once Tiblu came to know that a mountaineering camp was being organised in the nearby jungle. So he told his mother that he wanted to go. The Blue Mountain was not too far from Champakvan, and was a well known place for adventure trips. Mother Tiger was a bit worried to hear this.

She said, “But Tiblu, Blue Mountain is very tall.”

“Yes, mother, and that is why I want to reach the top of the mountain. Many of my friends, Freddie the Fox, Zimba the Leopard, and Tony the Wolf are going for mountaineering. And we shall travel only for four days.”

This became a very exciting news, and everyone felt that this was a moment of pride for Champakvan animals.

Special arrangements were made for the animals that were going for mountaineering.

King of the Jungle, Lambart the Lion announced special food facilities for them, which included a high protein diet. The Rooster family, who was in-charge of providing eggs to animals, made an extra delivery of eggs for the mountain climbers. Gardener Percy the Peacock made sure that healthy fruits reached them for good nourishment. A week before the mountaineering mission was to start, Freddie and his father came to meet Tiblu’s father to discuss the planning for children’s travel and safety.

After some general discussions, Daddy Fox spoke to the Daddy Tiger, “I have heard that Billy the Goat, who lives in our jungle, is a very avid mountaineer. Should we take his advice?” Tiger Dad frowned. He could not see eye to eye with Billy, for which the reasons were unclear.

Tiger Dad coughed, and said, “Oh yes! How could I forget Billy? But I have heard that he prefers to be domesticated and does not live in our  jungle anymore.”

Fox Dad  hastily added, “No, Sir. He is still staying in the jungle. Can we talk to him tomorrow?”

Tiger Dad agreed finally, “Okay, okay! We will  meet him tomorrow.” Freddie and his father happily returned home. The next day Tiger Dad and his son Tiblu, Freddie and Fox Dad, as well as Tony with his father and Zimba with his mother went to see Billy.

Billy’s house was on a slope in the jungle. It was little difficult for the guests to climb to his house. However, as the Goat family saw the guests coming, Billy and his wife stood welcoming them.

It was difficult for the tiger to gulp down the ego while seeking help from a goat.

But considering that it would help his son, he spoke to Billy, “Hello Billy Goat! We have come to seek your advice on mountaineering. We have heard that you have climbed many tall mountains. Kindly provide my son and his friends the right guidance for it.”

Billy was a kind animal. He smiled and said, “Welcome to my home, dear Tiger. I can understand that as a father you will be anxious to send your son for mountaineering, but let me tell you that it is not at all difficult to climb a mountain.” All the four children and their parents looked gapingly at Billy as he described some of his adventures of climbing very steep mountains.

At the end, Billy concluded, “If you have a strong will, nothing is impossible. Another important thing is good food. Your food should not be too heavy when taken before starting and during the mountaineering activity. You must also carry food which can provide for instant energy and light luggage. Make sure to carry a battery for night safety, and some woolens for warmth as mountain tops are cooler than the land.”

He continued, “I understand that a tiger, a leopard or a fox do not have paws with a good grip like us to climb the steep slopes, but do not worry. Blue Mountain is a simple climb, and your children will enjoy it.”

Tiger Dad, Fox Dad as well as Wolf Dad and Leopard Mother were really happy to listen to the advice given by Billy goat.

Tiger Dad realised that he had wronged Billy till now. He was not a dangerous animal though he had long horns. In fact, he was very kind and helpful to animals who sought his advice.

Mountaineers followed Billy’s advice, and started to prepare for their adventure. This helped them a great deal. When the day arrived, they were all well prepared for the task.

Tiblu, Freddie, Tony and Zimba left for the mountaineering camp. They looked happy, and even their parents seemed to be relieved by their preparations. Mountaineers reached to the top of Blue Mountain on the third day as per the schedule, and the whole team jumped with joy and happiness! Their dream had come true!

Then they started descending the mountain. Tiblu, Freddie, Tony and Zimba safely returned back to their parents in Champakvan after a long and tedious trek.

The next day Tiblu, Freddie, Tony and Zimba went to thank Billy.

They said, “Uncle, your advice was a great help to us. We were really motivated by that. Thank you for your guidance and tips for preparations.”

Billy smiled and said, “Children! No task is difficult in life, whether it be sports or studies or anything else. If you plan and prepare for it in advance, even climbing a mountain becomes a joy ride!”.

Mountaineering friends then hugged each other and started jumping joyfully! It was now time for celebration in Champakvan!