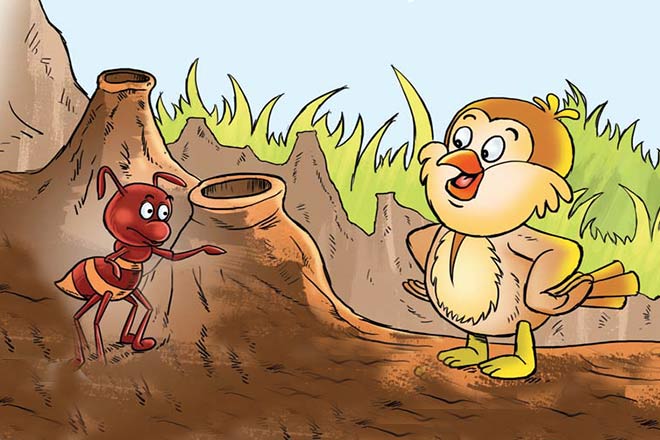 After sweating it out in the harsh sun, when Minti, the ant came home with a grain of rice, she saw that someone had filled her whole house with mud.

Who could have done this?” Minti thought to herself and kept the grain aside. She went inside her house and started removing the mud.

After some hard work, Minti was able to remove all the mud from her house. Huffing and puffing, she brought the grain inside and then went out to collect some more. When Minti returned, she again saw that someone had filled her house with mud. She started removing the mud again. She again kept the grains inside and went out to collect more.

When Minti returned home, she saw her house was filled with mud once again. She rested for a while and again she started removing the mud.

“Gauri, I am an ant. A hard working being. When those children don’t get tired of putting mud in my house, how can I be tired of clearing it? I will never be tired and one day, those children will learn to accept it,” said Minti.

That is alright Minti. But this bravery is nothing but foolishness. You are so small and the children are big. If they want, they can just stamp on you. But you can’t do that,” said Gauri.

“So you want me to give in because I am small. Then the whole world will only be ruled by the strong. Little beings will always have to live in fear. But Gauri, things are not like that. Strength is not in sizes, it is in self-belief. Don’t consider us small. Despite being small, we can still make them accept our worth. If I leave this place in fear, where will I go?” asked Minti.

“Some other safe place,” said Gauri.

“This place used to be safe too but today it isn’t. What is the guarantee, the place I go to will always be safe? If I run away in fear, then there will be no safe place left. Everywhere someone will show their strength and will make me want to run away. In life, there will be a struggle. We should always fight with courage. That is why I don’t want to run away.”

Gauri was carefully listening to Minti.

“You are right Minti. We shouldn’t run away thinking ourselves to be small. We sparrows also work very hard but if someone makes us fly away, we fly. That is why there is always a chance of us being hunted,” said Gauri.

Minti was happy that Gauri understood what she had said.

More From Champak: The Boastful Parrot

“Alright. Then I will leave to collect my grains,” Minti said.

“Alright, you go. Your words have taught me that I can do something too. I will make sure that your house is not filled with mud. I will teach a lesson to that person who tries to put mud in my friend’s house,” said Gauri, while laughing. Minti also became very happy hearing what Gauri had to say.

“Thank you!” said Minti, and left to collect grains.

hardwork, moral story, never give up, stay strong, will power