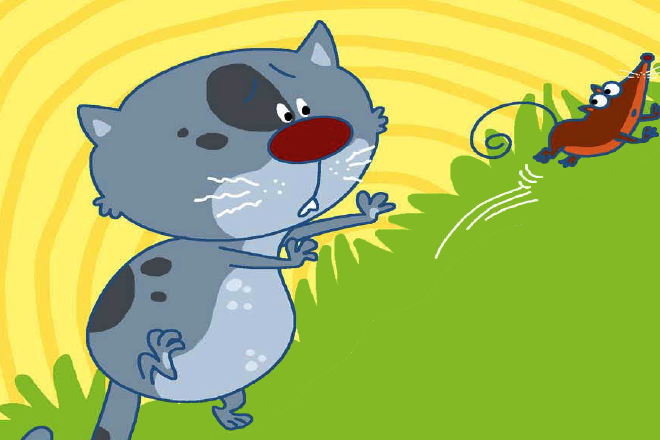 Pussy, the cat was feeling glum. She sat under the shade of a tree, looking forlorn. The reason for her sadness was that, over the years she had put on quite a bit of weight and was having trouble catching little mice and birds. Every time she would chase them, she would feel tired almost immediately and stop to catch her breath. By then, the mice and birds would be long gone.

Seeing her friend feeling sad, Lucy the cat walked up to her and asked her what the matter was.

“Oh, I was just thinking what it would be like to get your meals served to you without putting in any effort,” said Pussy. “It’s just that I’ve had so much trouble finding food lately that I haven’t had a single bite to eat in two days.”

“Oh Pussy, don’t be silly,” said Lucy. “Everybody knows that there’s no such thing as a free lunch. You will always have to work hard to get the things you want. Stop wasting your time on these stupid thoughts and come with me. I’ll treat you to the yummy milk and cream I have at home.”

The two went to Lucy’s house and were enjoying some milk and cream when an old friend of Pussy’s walked up to them. It was Scruffy, the fox. He had changed quite a bit and had lost a lot of weight too. “How are you, Pussy? You seem to be living well, your fat tummy proves it so,” said Scruffy.

“I’ve been alright, Scruffy. But tell me, where have you been all this while? You look different and in a good way,” sad Pussy.

“Well, I’ve given up my ways of cheating and living extravagantly and have moved to the himalayas. I spend the entire day meditating,” said Scruffy.

“The Himalayas? Isn’t is far away from civilization? What do you do for food there?” asked Pussy.

“To tell you the truth, food is the least of my concerns. The power of meditation is such that I can have the dish of my choice any time I want. In fact, anything I wish for can be had and all I need to do is meditate,” said Scruffy.

Pussy was in awe of how easy life was as a hermit. She thought of how difficult it was for her to catch mice every day, and how much she missed it. “Will you take me with you and teach me how to meditate? Life here has become too hard and I don’t like it one bit. Please take me as your student, I’ll go with you to the Himalayas and you can teach me your ways,” said Pussy. “Oh Pussy, you don’t need to come to the Himalayas for this. I could teach you the incantation right now,” said Scruffy. “But…” began Scruffy and trailed off.

“Well, the problem is that I can not teach the incantation to someone without accepting a teacher’s fee. You’re like my sister and I’m just thinking what I should do,” said Scruffy.

“Oh,” said Pussy and began to think. “All I have is this bowl of milk and cream,” she said. That was also all the food she had, and it wasn’t much.

“The teacher’s fee is a sign of respect and love, so the quantity does not matter. This will do just fine,” said Scruffy and whispered the incantation in Pussy’s ear.

“All you need to do is chant this incantation from sunset till sunrise the next day and the power will be unleashed. All you will need to do then is close your eyes and wish for your heart’s desire. When you open your eyes, it will be right in front of you,” said Scruffy and went on his way with the bowl of milk and cream. The same evening, Pussy started chanting just when the sun set, chanted throughout the night, and only stopped when the sun’s rays touched the ground the next morning. She was ecstatic. She ran to Lucy’s house and said, “You treated me to milk and cream yesterday and today, I’ll be treating you to the same.”

Pussy closed her eyes tight and wished for two bowls of milk and cream. She opened her eyes expecting to see the bowls in front of her, but there were no such bowls anywhere.

Pussy tried again and once again, there were no bowls of milk and cream.

Pussy tried once more before giving up. “Scruffy said this would work,” said Pussy, feeling let down.

“What did he tell you?” asked Lucy.

“He asked me to chant an incantation and said that if I wished for something it would appear in front of me,” said Pussy.

Lucy laughed and said, “It seems like Scruffy’s been up to one of his tricks. How could you believe him?” she asked, laughing. “Nothing ever comes from nothing. For everything you need to do work, or in Scruffy’s case, dupe someone out of their hard work and trick them into giving it away.”

Pussy realised that Scruffy had cheated her out of her bowl of milk and cream and felt silly for believing him. “Come on,” said Lucy. “Let’s go to the jungle and catch some mice.”

Pussy agreed and off they went. Pussy had learnt that the only secret to fulfilling your heart’s desires is hard work.