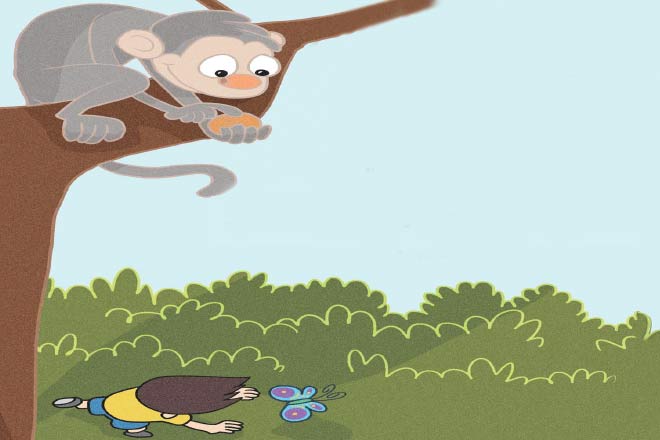 When Sonu came to his grandparent’s house, he was 10 years old. His uncle knew whatever Sonu liked.

“Take this plate of rasgullas and your favourite ball,” Sonu was overjoyed when Uncle gave him the things he liked.

“Thank you, Uncle, You are great,” Sonu popped a rasgulla in his mouth and went out of the house to play with the ball.

He hadn’t made any new friend here, so he started playing alone in the park. Sonu’s Ball

“Such a big ball! I am sure its weight must be more than yours,” When a girl, who was playing there with her friends, commented, Sonu blushed. The girl laughed out loud.

A monkey was sitting on the branch of a tree in the same park. He had been watching Sonu play with his colourful ball for a long time.

When Sonu got distracted with the butterfly, the monkey came down stealthily and quickly climbed back the tree after taking the ball with him.

A monkey was sitting on the branch of a tree in the same park. He had been watching Sonu play with his colourful ball for a long time.

When Sonu got distracted with the butterfly, the monkey came down stealthily and quickly climbed back the tree after taking the ball with him.

“Oh my ball? I forgot all about it getting diverted by the butterfly. I don’t know whether I will find it or not,” Suddenly Sonu remembered about his ball. He turned back and reached the place where he had left it.

But the ball was not there. “Where did my ball go?

That girl with the red ribbon must have taken it,” Sonu muttered.

It was late evening now. The entire park was deserted. Perturbed on losing his ball, Sonu began crying. “What will I tell Uncle?” Sonu was sobbing sitting on a bench.

After some time 2 robbers came to the park carrying with them stolen goods. Taking advantage of the darkness, they began dividing the booty among themselves sitting under a tree.

Just then Sonu’s ball slipped out of the monkey’s hands, who was sitting on the same tree, and fell on a robber’s head.

“G…G…Ghost.” The robber got frightened when he got hit suddenly and shrieked and fainted.

“Something is definitely fishy. Before anything happens to me, I should get out of here,” The other robber too got frightened and ran away leaving the loot and his unconscious partner.

When Sonu came there on hearing the shriek, he was taken aback. Just as he had picked up his ball, the police arrived there. They arrested the unconscious robber and seized the stolen assets.

“We were on the lookout for this thief since a long time. Well done Son, you helped us nab him. You will be rewarded for this brave act,” The Inspector said, patting Sonu’s back

“Sonu, are you all right? You have been out for so long. We have been searching for you,” Sonu’s Uncle too reached there.

“Brother, your little but brave child has done a daring act of helping us to nab the thief. You should be proud of him,” On hearing the Inspector’s words, Uncle held his head high with pride while Sonu was wondering how all that happened.