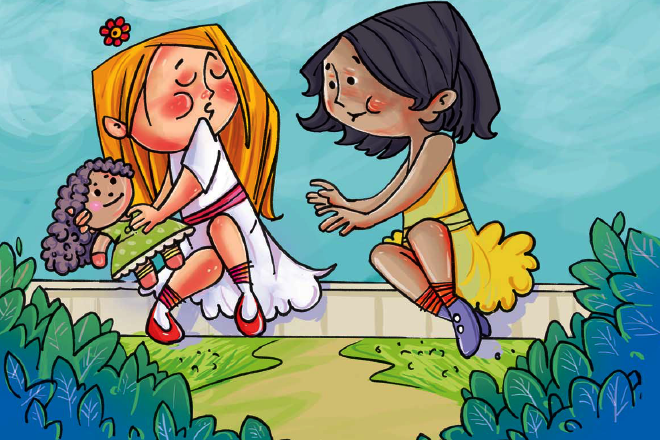 Asha and Priya were neighbours. They were both six years old and good friends. Being as young as six they experienced their own share of fights, laughter, anger, love and others. They always shared whatever they had, whether it was playthings or food.

But…… but…..but…..Asha had a doll that she never let Priya play with. Priya could not fight over it for Asha had found a way to deal with this situation. It went somewhat like this….

“May I have your doll for a while”, Priya would request!

“Of course, you can but she is sleeping and I just cannot wake her up, you know my granny tells me one should never wake up anyone while they are asleep,” this would be Asha’s reply.

“Oh….” Priya had to accept it reluctantly.

Another day Priya would again ask for the doll, and the prompt reply would be, “Oh no! I did not sleep the whole of last night because dolly was very sick. She was coughing and Mamma tells me never let anyone touch her, for they would get the cough and will have to be given a shot by the doctor!” This frightened Priya and she took a few steps backward.

This happened so often that Priya soon stopped asking for the doll which always had a problem. This suited Asha who was indeed very happy with the outcome.

One fine day Priya came running to Asha’s house screaming her lungs out “Hey Asha, we are moving to the next town, Papa has a new job there, I am going to miss you but now you will have nobody asking for dolly!” Though this made Asha very happy it also made her very sad for she would no longer be able to play with Priya.

Asha woke up one morning hearing a lot of commotion outside her house; she peeped out of the window and found that the movers were loading things from Priya’s house into their van.

She ran out and Priya came running towards Asha, she gave a tight hug and bid farewell and ran towards the car waiting to leave. Tears ran down Asha’s cheeks, suddenly in a flash, she ran inside as fast as her little feet could carry, picked up a gift and ran back with the same speed and screamed “Wait Priya, I have something for you”.

Priya’s father stopped the car. Asha came running, gave the gift in Priya’s hands, planted a kiss on her cheek and soon the car left.

Priya opened the gift impatiently as any kid would and there inside it was DOLLY with a beaming smile, she turned around and saw Asha waving her hands happily with tears in her eyes.

Priya now realized that she was more important to Asha than her lovely Dolly! Priya screamed, “I love you, you are my best friend”.