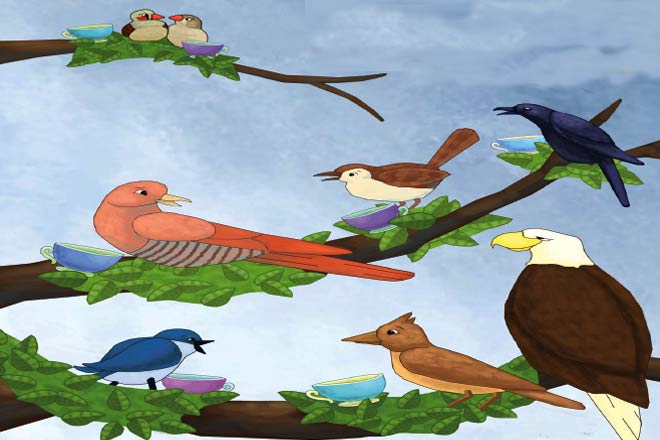 Once upon a time, long, long ago, even before humans inhabited the earth, Miss Cuckoo who loved the good life, decided to have a special tea party.

She invited all the birds she knew. She even sent fancy invitation cards to the great eagles, to the larks, the finches, the swallows and the crows. Miss Cuckoo also sent an invitation to the little brown bird that sings alone in the hedges and has no name. As the feathered creatures arrived, Miss Cuckoo greeted them warmly and asked them to sit around a grand old tea table. She then graciously gave them cups of sweet tea and whatever they liked to eat best. The birds wondered why Miss Cuckoo had taken so much trouble to have such a grand tea party and gather them all together. And as the saying goes to this day, they thought that she was being “as silly as a cuckoo”.

When the birds had drunk enough tea and had eaten to their heart’s content, Miss Cuckoo hopped on to the centre of the table. “Friends, listen carefully,” she said. “We birds need someone to be our King. And so, I suggest that we crown one of us as the King of Birds today, so that there’s someone to lead us all and look after everything.” The birds began to chirp and chatter. “That’s a good idea!” they said.

Then, almost each bird present at the tea party, offered to be the King, as each was sure that he had royal blood in his veins.

Soon, the birds began to argue and quarrel amongst themselves. Just then, Mr. Rooster came by with his many wives, the hens. He heard the commotion and rushed in.

When Mr. Rooster heard what the problem was, he instantly had a solution to offer.

Well, Mr. Rooster was an expert at settling disputes since he was used to solving the many quarrels that broke out amongst his many wives.

“Why don’t we have a contest?” he suggested. “We will never decide anything by arguing. We can appoint the bird who is able to fly the highest as the King of Birds!”

All the birds liked Mr. Rooster’s idea. Except for Mr. Plover. He was a small bird who lived near the water. Mr. Plover got up in a huff and walked into the woods without saying a word. In the meanwhile, the other birds got ready to prove their mettle.

They stood in a row and spread their wings wide open. They then flew with all their strength, and as high as they could, high up into the air. Mr. Lark flew higher than the other birds at first. But soon, he was beaten by Mr. Eagle who soared so high, that in no time he looked like a speck in the sky.

“Aha! So, Mr. Eagle is the King of Birds!” Miss. Cuckoo chanted joyfully.

However, the birds soon noticed that there was another speck in the sky. And it was much higher than Mr. Eagle.

They realised that it was the little brown bird that sings alone in the hedges and has no name. He had hidden himself in Mr. Eagle’s magnificent feathers and had flown with him for a while. He had then broken away and flown higher all by himself. “No! I am the King of Birds!” the little brown bird twittered as he flew down and joined the others. Most of the birds objected. “You’re a tiny bird! You’re not fit to be a king!” they argued. Mr. Rooster came up with an idea once again.

“I’m sorry,” he said. “The mistake is all mine. If you don’t want this wee bird to become the King of Birds, let me give you another idea. Why don’t we make the bird who is able to fall deepest into the earth our King?”

And so, all the birds began to look about for places to jump into. Mr. Duck even tried to see how long he could hold his breath for, since he planned to jump into a pond. In the meanwhile, Mr. Rooster called out to his many wives and instructed them to dig a deep hole in the ground.

He then hid himself in the hole and crowed, “Cock-a-doodle-doo! I am the King of Birds now!” However, the little brown bird that sings in the hedges and has no name, outdid Mr. Rooster. He crept into a mouse hole and chirruped, “No, I am! I am deeper in the earth than any of you are. I am your King!”

All the birds decided that they would not acknowledge the little brown bird or let him come out of the mouse hole and claim his title. They asked Mr. Owl to sit near the opening of the mouse hole and keep a watch. All the other birds then flew home since they were tired after Miss. Cuckoo’s tea party and the contests they had participated in.

Mr. Owl stayed on and kept awake all night. He watched the mouse hole carefully and did not allow the little brown bird to even peep out. But when morning dawned, Mr. Owl found that he couldn’t keep his eyes open anymore. They simply drooped and shut. In no time, Mr. Owl fell fast asleep.

The little brown bird quietly skipped out of the mouse hole with the help of a few mice.

“Ha ha!” he chirped and laughed as he came out. “I will give myself a name now! I will call myself ‘The Little Hedge King!”

The other birds were disappointed when they found that the little bird had outsmarted them. They accused Mr. Owl of being lazy and not doing his job well.

Well, this is why Mr. Owl still sleeps in the daytime and stays awake at nights. And this is also why he watches mice and mice holes so carefully.

As for the little brown bird who sings alone in the hedges, he really made himself a king. Some people call him the wren while some others, ‘The Little Hedge King’.