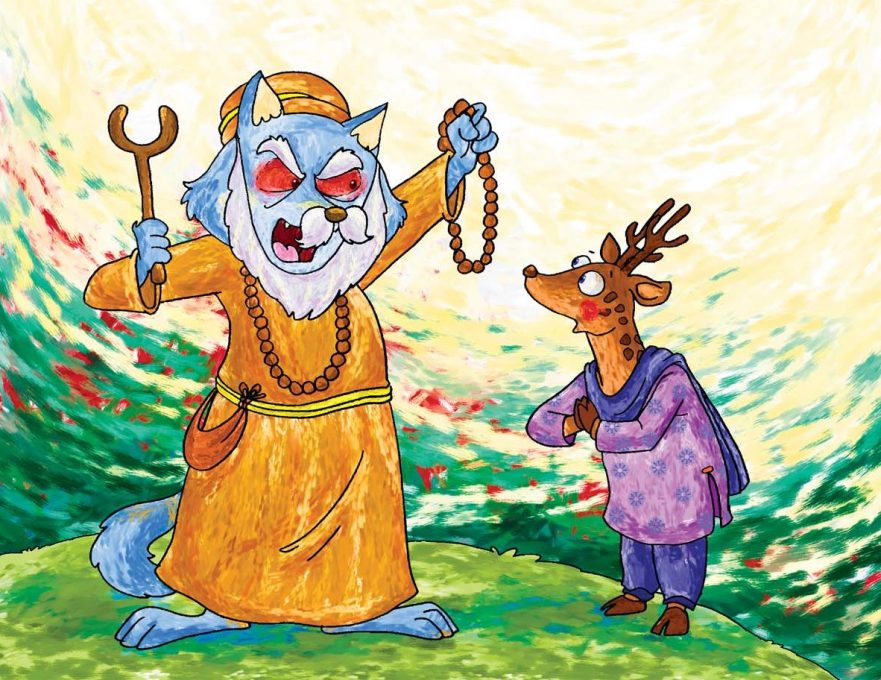 Dina and Soni, the deers were the best of friends. They were neighbours too, since their homes were right next to each other. Soni was a tailor and Dina was a schoolteacher. She was happy to teach the young animals who studied in the forest school.

Soni was very superstitious. She believed in rituals and would spend all her free time performing rituals. She had been having some tough times lately. The heavy rains that lashed the forest every monsoon, had damaged the roof of her house and made it leak. The house was drenched, and Soni had to stay in Dina’s house, and pay the repairmen a huge amount of money to repair her roof.

When Soni finally went home, she found that her sewing machine had stopped working. She again had to pay a lot of money to repair it, and was out of work for many days. Soon after that, she had a fall while running to the market, and hurt one of her legs.

One day, Soni saw an old man with a long beard standing outside the house.

“This house has a spirit hovering above it,” the old man shouted. “It is a very evil one! It is causing trouble for the house owner.” “I’ve had so much trouble of late,” Soni thought. “This old man must be right! He must be powerful baba and can probably see an evil spirit hovering above my house!”

Soni called out to the old man and asked, “How do you know this?”

The old man closed his eyes, and looked like he was lost in thought. He opened them a few minutes later. Soni gasped. The old man’s eyes were flaming red.

“I can see the evil spirit that’s troubling you right now,” the old man shouted. “He has broken your roof and has also made you fall down. I think he has meddled with your sewing machine too. He is very evil and wants to cause more trouble for you!”

Soni’s jaw dropped. Her eyes grew wide. She believed every word of what the old man was saying. “He definitely must be a great baba!” she thought.

“Baba,” Soni then said, “Please tell me how I can protect myself from this evil spirit who wants to harm me!”

“Well, I can help you if you like,” the old man said. “I can come back after two days and perform a ritual. It will take a few hours to complete. But be assured that it will drive the evil spirit far away from your house.”

Soni trusted the old man. “He will drive the evil spirit away and solve all my problems,” she thought.

“Baba, let’s perform this ritual,” she told the old man eagerly. “Please tell me what you will require.”

The old man gave Soni a list of things that she needed to buy. He then told her that he would come back to perform the ritual after two days.

As soon as the old man left, Soni ran to Dina ’s house. She told her about the old man and the ritual that he would perform to drive the evil spirit away. But to her great disappointment, Dina grew very upset and scolded Soni harshly.

“Soni, since when have you become so foolish?” Dina shouted. “How can you believe this old man, huh? He must be a conman who’s trying to cheat you! There are no such things as evil spirits! You’ve just been having some bad days! We all have them at some time or the other!”

Soni was not convinced. “How did he know about my troubles?” she asked.

Dina shook her head and replied, “Everyone in the forest knows about your leaking roof, your sewing machine, and your fall. It’s a small forest and news spreads easily. The old man must have heard about you from someone you both know. Please listen to me and stay away from him.”

But Soni didn’t listen to her friend. “Well, there’s no harm in performing a small ritual, is there?” she said and stormed out of Dina’s house.

Dina realised that it was useless to say anything more to her friend. She decided that she would secretly keep an eye on the old man when he went to Soni’s house next.

After two days, the old man knocked on Soni’s door. Soni was very happy to see him. She invited him in to perform the ritual.

“Eat this,” the old man told Soni and gave her some food to eat. “It is part of the ritual!”

Soni respectfully ate what she was given. She was convinced that the old man was her well-wisher, and that he would drive the evil spirit away from her house. She sat down as the old man began the ritual, and hoped that all her troubles would soon be over.

Suddenly, Soni felt as though the world around her was spinning. “Aaahh!” she cried. “Why am I feeling so giddy?”

Little did Soni know, that the old man, was young Juno, the jackal in disguise. He was a notorious conman who wanted to steal the money and gold that Soni had in her house. Soni was feeling giddy because Juno had mixed a sedative in the food that he had given her to eat.

Soni found herself feeling drowsy, and in no time, she fell fast asleep. Juno laughed when he saw Soni sleeping. He quickly gathered all the money and gold he found in the house.

“I’ll leave before she wakes up,” he said, running towards the door. But the moment Juno opened the door, he found Inspector Benny, the bear standing in front of him.

Inspector Benny handcuffed Juno immediately. Dina then rushed into the house with Dr. Appu, the elephant, and ran towards her friend.

When Soni woke up, Dina told her what had happened. Soni cried and held her friend’s hand. “You saved me, my dear friend,” Soni said gratefully. “Had you not alerted the police, Juno would have surely stolen all my gold and hard-earned money. But tell me, how did you suspect that he was a conman?”

Dina replied, “Well, I stood outside your house to watch what was happening. When I heard you say that you were feeling giddy, I realised that something was very wrong. And so, I ran to alert the police and call the doctor. Inspector Benny guessed that the old man was Juno in disguise, since he is notorious for playing such tricks.”

“I have learnt my lesson,” Soni said. “I won’t believe in evil spirits or babas. I’ll accept the bad days of life gracefully, for I know that they will be followed by good days!”

Dina smiled. She was glad that her friend wouldn’t fall for a conman’s tricks ever again.