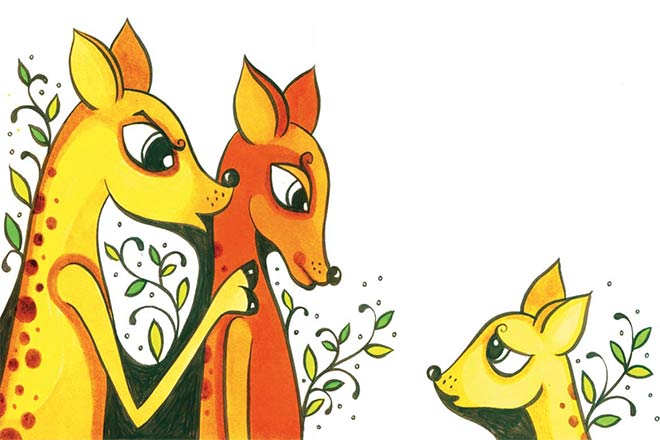 Acute deer lived in Sudervan. His name was Peelu. He was disinterested in studying. Peelu’s parents wanted him to study and do something good. A new school had commenced in Sundervan. Peelu’s parents got his admission done in that school.

Peelu tried to study a lot, but he couldn’t concentrate on his studies. His parents got very upset with him on this issue. They kept him out of the house for a whole day without food and water. And keep scolding him. After that Peelu promised to study hard, but this couldn’t happen. He failed his exams.

Chinky Rabbit was Peelu’s neighbour. She was Peelu’s classmate and would always come first in the class. Chinky’s parents had organized a party to celebrate her success. Peelu and his parents were also invited to the party. Everyone asked about Peelu’s result. Peelu’s parents informed everyone with a heavy heart that Peelu had failed.

Peelu felt very bad. He couldn’t raise his eyes out of shame. He sadly came back home. He started feeling that he is useless. He can never pass, and can never do anything well.

The school started again after the summer break. Whatever his teacher would teach, Peelu couldn’t understand. He stopped talking to his friends because they used to make fun of him.

He would sit for studying out of fear for his parents, but he couldn’t concentrate. When the result for the exams was declared, he had again failed.

He didn’t go home as he was scared about what he would tell his parents. He was roaming in the jungle. Suddenly he heard some voices near the bushes. He hid behind the bushes and started listening. A wild boar and a jackal were talking.

The jackal told the boar, “See, we have laid a very nice trap. Sher Singh comes here for a walk daily. He will definitely get trapped in the net. Our king Krur Singh will be so happy on hearing this news. He will reward us for catching Sundervan’s King Sher Singh.” Peelu was taken aback on hearing this. Sher Singh was going to come there soon. He thought that he had to save his king’s life. Without any delay, he started to find Sher Singh. He had just gone a little further when he found Sher Singh on the way. He told him everything.

Sher Singh went to that spot with Peelu. He threw a big stone in the net which then got trapped in it.

Sher Singh invited all the animals of Sundervan for tea in the evening. He welcomed everyone and said, “Friends, I have given this party in the honour of Peelu. He saved my life today.” Then he narrated the entire story.

He called Peelu’s parents too on the stage and gave Peelu a bag full of chocolates. Peelu’s parents were overjoyed. In front of everyone, they asked Peelu to forgive them for scolding him.

Peelu realized that he had fulfilled his duty. He was feeling happy at the contentment of his parents. He had developed confidence in him too.

He had developed confidence in him too.

His parents too stopped nagging him all the time for studying.

Peelu decided that he will study with complete devotion and come first in the class. After that, when Peelu opened his books and began studying, he could understand the concepts.

He started liking books. He was surprised that why hadn’t he read the books with interest before.

When the exams came near, he started studying harder. When the results were declared, he was astounded. He had come first in the class. His teacher and friends applauded his efforts. Even his parents were very happy now.