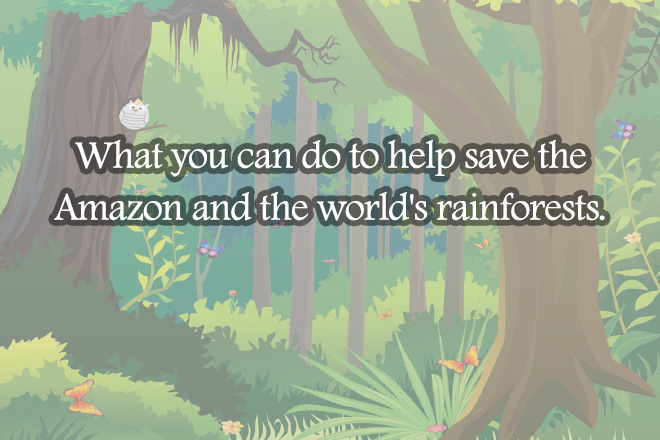 As you all know that rainforests are more than its beauty. But with vivid diversity in flora and fauna comes great responsibility of taking care of it. Rainforests played an important ecological role in keeping our planet healthy.

It mainly absorbs carbon dioxide and releases the oxygen that we depend upon for our survival. This absorption of CO2 is very important as it helps to stabilize the Earth’s climate.

Not just that rainforests also helps to maintain the world’s water cycle. They add water to the atmosphere through the process of transpiration which ultimately creates the clouds. Did you know that the water generated in rainforests travel around the world?

Half of the earth’s wildlife inhabits in the rainforests and there are more than thousands of rainforests plants and animals who are still waiting to be discovered. Their fate now depends on our hands.

The biggest question is ‘Will we let them?’

Amazon Rainforest acknowledged as an environmental treasure which serves ecologically not only the local communities but the entire world is now at the verge of destruction. It is disheartening that these devastating fires have almost destroyed our ecological treasure.  Undoubtedly this will have a catastrophic impact on the planet’s well being. But it’s better late than never. There are still a few steps that can bring a positive impact.

How the Amazon Rainforest, global warming and YOU are Interconnected.
With the increase in wildfires, greenhouse gas emissions will be more than it is supposed to be which will increase the planet’s overall temperature. And so drastic weather conditions like major droughts or floods could happen more often.

Not just that, this major deforestation would directly affect the rainfall patterns of the involved region, directing towards the lengthy dry season, further stirring the biodiversity, agriculture and much more.

The Amazon rainforest is often called the “lungs of the planet” and plays a significant part in climate control. It would affect the world severely if the rainforest were to disappear, with impacts on everything from farms to the air we breathe.

What you can do to help save the Amazon and the world’s rainforests.
1) Reduce your paper and wood consumption.

2) Reduce your oil consumption, fossil fuels consumption. Make sure you are using it sustainably.

3) Be an active participant Invest in rainforest communities.

Rainforest Action Network accepts donations which are used to protect one acre of the rainforest. There are various verified organizations/communities which are working for the preservation of Rainforests. You can donate or volunteer with them. 4)Do your bit. Plant more trees, you can also conduct a tree plantation drive or nature campaign in your school/localities/offices.

Every plant matters. Every species matter. Every acre matters. 5) Go sustainable. Live sustainably. Practice what you preach. Posting just one trending hashtag is not going to resolve this matter. Take the necessary steps towards a more eco-friendly lifestyle.

For instance, keep a check on your water usage make sure you and your friends and family members are not wasting water, conserve energy by turning off the lights when not needed, don’t waste food, learn to compost, cut out the use of plastic in your life and last but not the least RECYCLE EVERYTHING.

Show your support. Raise your voice. Do your bit. After all, nobody wants to buy oxygen for their kids in the future instead of toys.