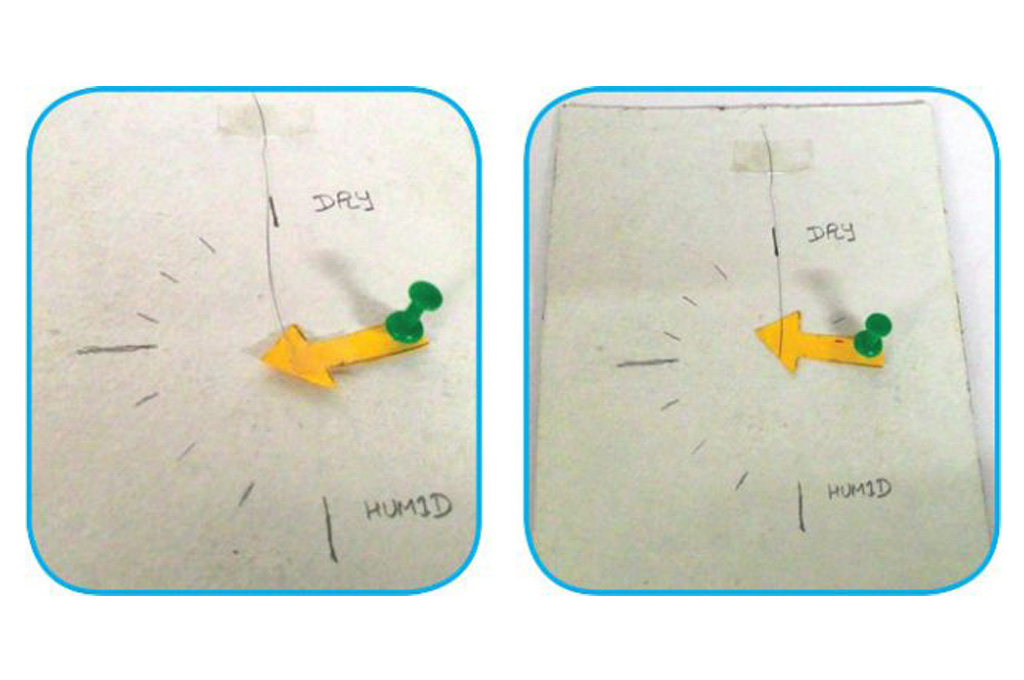 Stuff:
• Chart paper,
• A rectangular piece of cardboard,
• A tack or notice board pin,
• A strand of human hair (clean and dry; not oily),
• A pencil,
• Scissors 1. Draw an arrow on the chart paper and cut it out. 2. Pierce the arrow with the pin and make sure it can rotate freely around the pin. Pin the arrow to the board loosely so that the arrow swings down. 3. Tape one end of the strand of hair to the board and the other end to the arrow so that the arrowhead is horizontal as shown. How does the simple hygrometer work?
Hair has the property to expand when wet and shrink when dry. Hair fibre can absorb more than 30 percent of its own weight in water, which makes it heavier and longer. So when there is more moisture in the air, the hair taped to the arrow absorbs the water and expands, which makes the arrow point down. And when the air becomes dry, the hair loses the water and shrinks, pulling the arrow up along with it.

Why do we measure humidity?
Humidity refers to the amount of water vapour in the air. Water vapour—from water on land and in the oceans—is a key greenhouse gas, which helps block harmful UV rays from the sun. It also traps heat on Earth that makes life on Earth possible. But too much water vapour, or high humidity, will cause Earth to heat up more, making hot days seem hotter. Therefore, measuring humidity, along with temperature, gives us an idea of the weather. The first ever hygrometer-like device was invented by Leonardo da Vinci in 1480. But the first working modern hygrometer was created by Johann Heinrich Lambert in 1755. Since then, different types of hygrometers that have been invented that measure humidity based on temperature, pressure or a mechanical or electrical change within the meter.