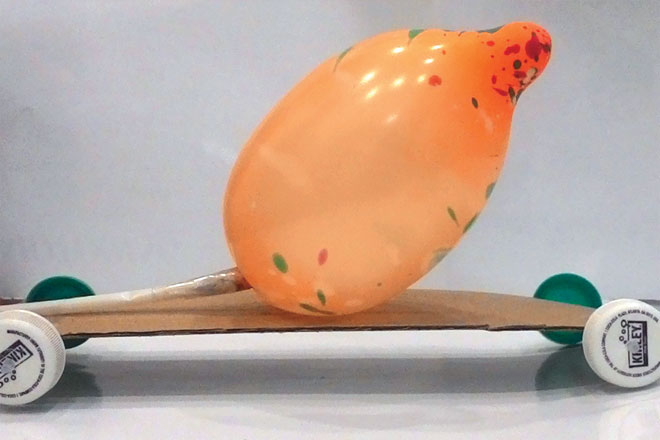 Take a sheet of cardboard that has a width shorter than the length of the ball pen refill that you have. Attach two straws on both ends of the sheet using tape. With the help of an adult, make holes in the centre of two bottle caps big enough for a refill to go through them. Insert one end of the refill through the straw and attach to a bottle cap as shown. Repeat the step for the second straw. Take the third straw, put the balloon in it and seal with a tape. Stick the straw vertically across the sheet of cardboard as shown. Inflate the balloon by blowing in through the straw and cover the open end of the straw with a finger to hold the air in. Then lift the finger and release the car on the floor or any flat surface. When you remove your finger, you will see the air escaping through the straw and pushing the car forward.

What is a compressed-air vehicle and how does it work?

Since petrol and diesel are limited resources and their reserves may soon run out, experts are looking at alternative sources of energy to power vehicles. While electric and hydrogenpowered cars are the popular alternatives, car manufacturers are also designing compressedair vehicles (CAV). Much like our little balloon car, the CAV has air stored in a tank, which is released in a controlled manner to move the car forward. While some designs come with a little electric motor that compresses the air and stores it in the tank, other designs involve setting up compressed air stations similar to petrol stations.

What makes the car move forward?

When the air is released from the balloon, it is squeezed out through the narrow opening of the straw. This builds a lot of pressure causing the air to exit with a lot of force, thereby pushing the car in the opposite direction. It is similar to how when you partially block the opening of water hose, the water gushes out with greater force and travels farther.

By attaching the balloon to the straw, we ensure that the air is released in a controlled manner, which makes the car go in a straight line.

This experiment illustrates physicist Isaac Newton’s Third Law of Motion which states that, “Every action has an equal and opposite reaction”. Here, the air escaping the balloon is the action, while the car moving in the other direction is the reaction.