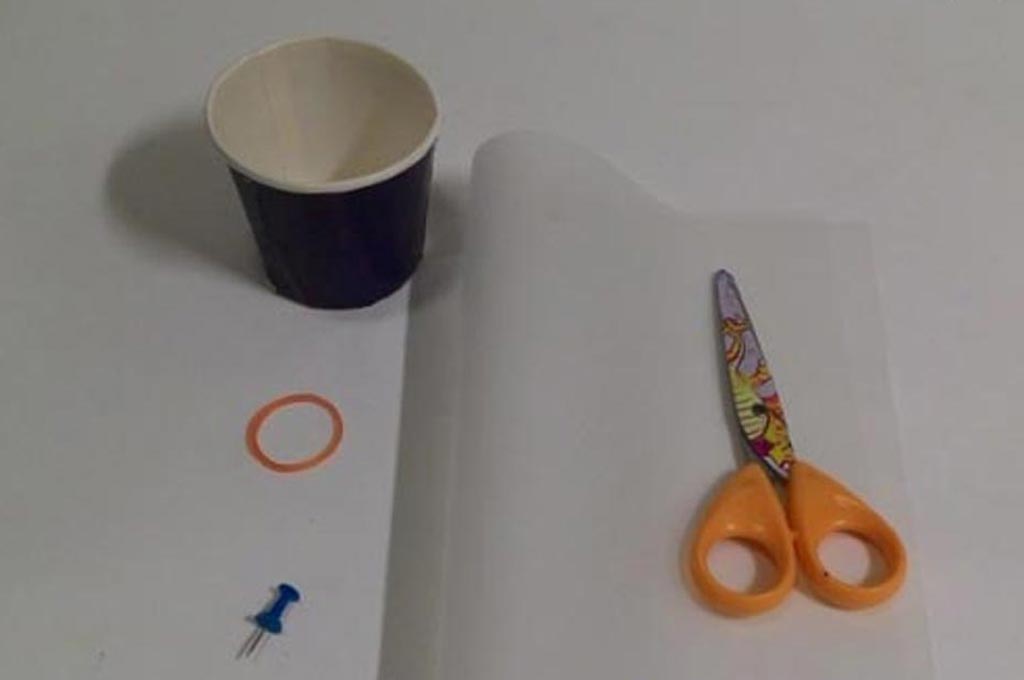 Do:
1. Make a tiny hole in the bottom of the cup using a pin. Make sure that the hole is round and smooth. 2. Cut out a piece of wax paper larger than the mouth of the cup. 3. Secure it across the mouth of the cup using a rubber band. Darken the room and point the pinhole at a bright window or any single light source. See:
The image that is projected on the wax paper, which acts as the screen, appears upside down. Why did the image appear upside down?

Light can be focused so that it appears to meet at a single point. Light from the object enters the cup through the pinhole, which focuses the light onto the screen (wax paper). One of the properties of light is that it travels in a straight line. Hence, the light from the top of the object travels in a straight line towards the pinhole and continues to the bottom of the wax paper. The same goes for the bottom of the lamp, from where the light travels in a straight line, through the pin hole and to the top of the wax paper. The light from the left and right sides of the light source also go through the pinhole and are inverted on the screen. Hence, the image appears upside down. It is similar to how our eyes see objects—the image formed on the retina in our eye is inverted as well. The brain then flips this image back.

What is the significance of the pinhole camera?

During the early days, pinhole cameras were used to observe eclipses. The concept was applied to a room where the image of the eclipse was projected onto one of the walls through an opening in the opposite wall. The concept was then applied on a small scale to create a portable instrument. Variations of this instrument were used as drawing aids and later formed the basis of the modern camera. Later, scientists also discovered that a pinhole camera could be used to photograph X-rays and gamma rays which otherwise would be absorbed by ordinary lenses.