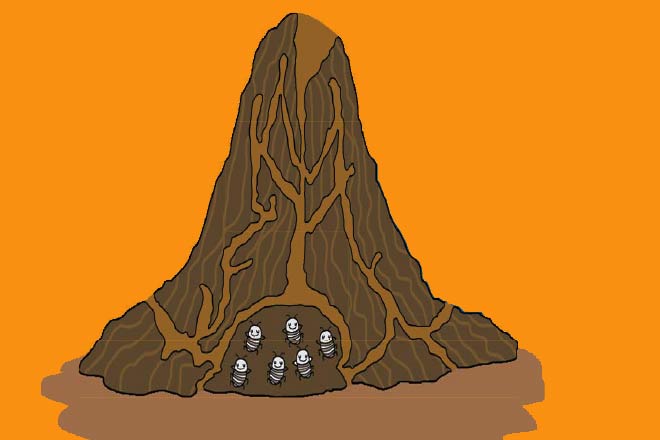 Termites are insects that live in colonies with a hierarchy similar to that of the bees: Queen, soldier, worker and larval termites. They live in either nests or mounds.

The mound-building termites build strong mounds that can be as tall as 25 feet and live in the lower part of the mound that is underground. Irrespective of the weather outside, the inside of the mound always remains cool at 30 degree Celsius because of a network of tunnels that make up its ventilation system. The tunnels extend across the length and breadth of the mound and are all connected to one big central tunnel that runs through the centre.

During the day, when the temperature rises, the air near the opening of the mound becomes warm. As hot air rises up through the tunnels, the cool air, being denser, sinks lower through the central tunnel. This keeps the temperature inside the mound cooler than outside. Termites control the temperature of their mound because they farm a type of fungus, which grows only in this temperature. This fungus is their main source of food.

Termite mounds can outlast the colonies that built them. Some mounds have lasted even up to 2000 years.