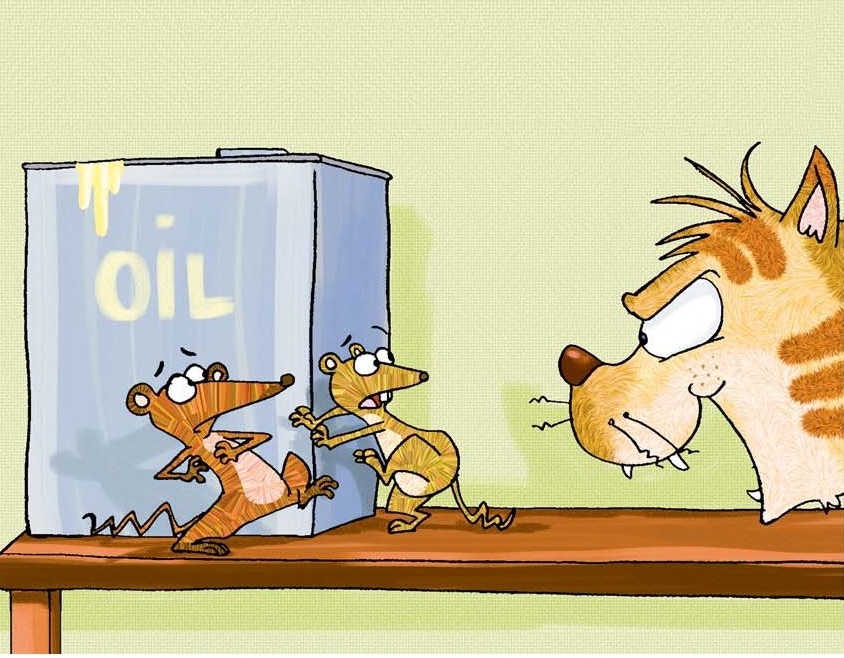 Kitty, the cat was famished. Her stomach was growling. She hoped to come across a plump rat soon. She tiptoed into a house and crept inside the kitchen. Kitty wished that she would find a few rats scampering there. If there were no rats, she hoped that she would at least find some milk.

But to Kitty’s dismay, there weren’t any rats in the kitchen. And the milk was inside the refrigerator.

“Sheesh!” Kitty muttered. “Why do people use refrigerators? Refrigerators have doors that are hard to open. They deprive us cats of milk.”

Kitty felt disappointed and turned to go when a sound startled her. She turned to see if somebody from the house had spotted her. Instead, Kitty saw something that made her grin from ear to ear. Kitty’s joy knew no bounds. “These rats are clever!” she giggled. “They are drinking oil from the can, without even touching it. I’m lucky to have found them. I will catch hold of one of them for my dinner.”

Mak and Jay heard Kitty  giggling and looked up. They began trembling as soon as they saw her. They were sure that she wouldn’t let them escape.

But Mak didn’t want to give up so easily. He gathered all the courage he had and said, “Hey! Come and look inside this box! It contains some buttery chapattis. I think you’ll like them. They are quite delicious!”

“I am going to feast on one of you today. Nothing can change that. Not even buttery chapattis!” said Kitty.

“Er… Feast on one of us?” Jay was shaking like a leaf in the wind.

“Yes, I am going to eat one of you,” Kitty said and laughed. “And remember, there can only be one relation between us. That of a hunter and prey!”

“Have you heard of King Venkatraman Singh of Reeva? He was a great hunter too. My grandmother has told me many stories about him. He was very strong. It seems that every time he threw a spear, it would split open the trunk of a tree.”

“I’ve heard that too,” Kitty said, showing off. “I know what a good hunter King Venkatraman Singh was. I know many stories about him.”

Kitty then tried to recollect what else she knew about King Venkatraman Singh. Mak and Jay noticed that she was distracted and tried to slip away. But Kitty was quite sharp.

“Hey!” she hissed angrily. “Stay where you are! I am going to eat one of you now!” Mak decided that he would keep Kitty talking. He then said, “Did you know that the real hunting was done by King Venkatraman Singh’s favourite white lion? His name was Mohan. By the way, have you ever seen a white lion? I have heard that white lions are found in Reeva. Have you ever been there? I have always wanted to go to Reeva and see if it’s true.”

“No, I haven’t seen a white lion or been to Reeva,” Kitty said. “But I am quite sure that white lions exist. We cats are related to lions, you know? We are cousins. And if white lions exist I’ll definitely meet them when I go to Reeva…”

Kitty continued talking and didn’t notice Mak and Jay tiptoeing out of the kitchen. They ran away from her as fast as they could.